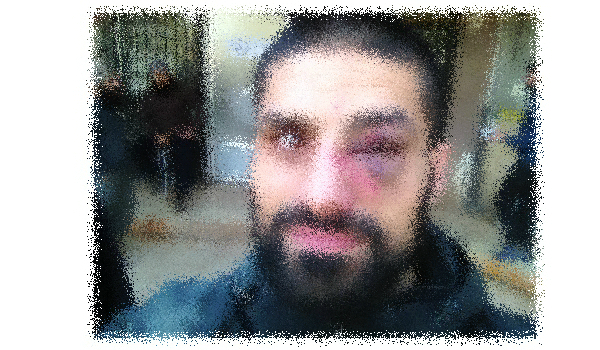 
The European Federation of Journalists (EFJ) and the Danish Journalists’ Union (DJ) have strongly condemned Turkish border police for the assault of Danish journalist Nagieb Khaja on 2 December while crossing the border into Syria to cover the refugee crisis.

The EFJ member in Denmark, DJ, has immediately written to the Ambassador of Turkey in Denmark protesting the attack on Khaja.  Following the demand of the organisations to investigate the assault, the Turkish authority has responded today that they have started an investigation into Khaja’s case.

Mogens Blicher Bjerregård, the EFJ President said, “We have witnessed Turkey’s disregard for the fundamental rights of journalists, whether local or foreign. Khaja’s is clearly targeted because he is doing his job as journalist.”

On Khaja’s Twitter account (see headline picture), he posted a picture of himself with a swelling eye covering with bruises. He tweeted, “When I was crossing the border they [Turkish security forces] saw me. I identified myself as a journalist, but they threw me to the ground and kicked me in the head and face several times.”

Khaja told local media that he showed the Turkish border guards his press card and told them that he was ready to hand himself over voluntarily. “But they started beating me and when I showed them my press card again they beat me even harder, throwing me to the ground and kicking me in the head and face,” Khaja said.

Khaja is a freelance journalist and author covering conflicts around the world.  He is now in Syria reporting the crisis. In an interview with local media, he said, “I know Turkey has laws and rules, but sometimes a cause is too important for the press to adhere to the rules. It’s important to cover the tragedy in Syria and that’s where good journalists should always focus their attention. It is not like I stole anything or was hurting anyone,” the journalist added.

“Europe is facing a huge humanitarian crisis at the moment. Journalists like Khaja are taking a personal risk in order to tell the truth for our citizens and act as watchdogs to report on human rights abuses of refugees. The authority must allow journalists to do their jobs,” emphasised Blicher Bjerregård.

The EFJ has submitted a media violation report to the Council of Europe Platform on protection and safety of journalists demanding Turkey to apologise and investigate thoroughly Khaja’s case.