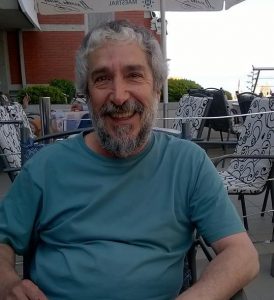 I am 62 years old (2 June, 1954) and since 1999 I am a sub-editor at “Phileleftheros” daily newspaper, the largest newspaper in Cyprus. From 1988 to 1991 I was a volunteer sub-editor and writer in setting up and publishing the weekly political newspaper “Embros”, dealing mostly with international issues.

A committed trade unionist, I believe that by collective efforts we can strengthen and safeguard the freedom of the press, defend the right to free expression and opinion, protect the independence, freedoms and rights of journalists, improve their professional position and improve their terms and conditions of work through the collective agreement process and raise journalistic standards. As from 2004, I am an elected member of the Executive Committee of the Union of Cyprus Journalists and from 2007 a member of the Cyprus Media Complaints Commission.

Among others, I have participated in the MEDIANE-Media in Europe for Diversity Inclusiveness project, attending several meetings, and the “The role of the media in promoting intercultural dialogue, tolerence and mutual understanding: freedom of expression in the media and respect for cultural and religious diversity” organized by the Council of Europe.

I am an active member of bi-communal NGOs working for the solution of the Cyprus question and the reunification of our country. Recently, as a member of the joint committee of Greek and Turkish Cypriot journalists unions, I took part in the organization of the first joint event since 1974. I am also a committed antiracist and an active member of KISA-Action for Equality, Support, Antiracism, the oldest and most vocal NGO in Cyprus in the areas of migration and asylum and against racism, discrimination and hate crimes.

I present myself as candidate for the EFJ Steering Committee because I believe that small countries, especially in South Europe, which are faced with a prolonged economic crisis and the humanitarian crisis concerning refugees and migrants from worn-torn Syria and other countries, must be present and have a voice at the decision-making bodies of our union. If I am elected, I declare my commitment to working hard and effectively along with the other members of the EFJ Steering Committee in order to promote our common goals and actions.