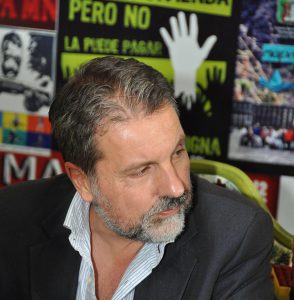 2002/04: ‘Terras do Leste’ (Lands of the East), an approximation to the ten new members from Eastern Europe that joined on 1/5/04 in the European Union: Poland, Estonia, Latvia, Lithuania, Czech Republic, Slovakia, Hungary, Slovenia, Malta and Cyprus

2000/02: ‘Terras de Merlín’ (Merlin´s Lands): a series of ethnographic documentaries (13 chapters) on the realities and legends of past and present of Celts countries: Ireland, Scotland, Isle of Man, Cornwall, Wales, Brittany, Asturias and Galicia.

1986/90 ‘Galicia no Mundo’ and ‘Galeguidade’: programs about Galician migration around the world  visiting more than 70 countries.

I present myself as candidate for the EFJ Steering Committee and request your support for the intense work that expected to me in the next three years, if I am elected. I wish you to put your trust in me. I´m sending my CV attached and underline to you that I have a vast experience as a professional journalist, as well inside in the syndical organizations. The last years I have developed a job as an elected member of the IFJ Excom. Was an interesting experience. This time I preferred to focus my efforts in European colleagues. Under two points of view:

1º) I´m confident that we need to take more influence in group –élites- of decissions. Not only in political way, but in intelectual, economics, universitarian, etc….. we share same interests but as a EFJ we have to target the solidarity. Work together as a lobby. We need to achieve knowledge and experiences for other social groups… and..the final target is: Changes in European mentality in favour of Journalism.

2º) Motivative youths  and women journalists. Give entusiasm in both groups. Involving them, and everyone, in favour of tecnhological changes for medias, (TIC. Investigation & Develop & Innovation) without lossing our principles of journalism.: Solidarity, Independence, Professionalism….searching always THE TRUTH.

I hope to see everyone in Sarajevo