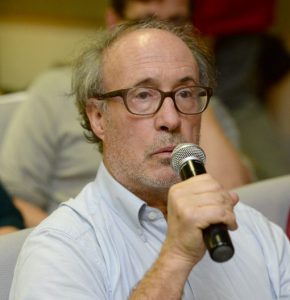 Patrick Kamenka, former journalist with AFP for nearly 40 years. I used to cover the Soviet union and many war zone conflits  (former Yougoslavia, USSR, Iraq). In charge for my union SNJ-CGT on the international issues. Working on the Turkish campaign with TGS for EFJ. Member of FREG. Elected twice as Steering comittee member. Reserve member from 2013-2016.

The EFJ is facing crucial challenges because of the increasing concentration of ownership in the media industry. Mainstream media are more and more linked to banks and big international companies dominated by  telecommunications and global giants such as Google, Microsoft, Appel, Amazon. The  Independent press is in great danger and with it pluralism which is severly threatened in many parts of Europe.

The new media owners are not concerned about good quality content. To be more profitable they need to reduce costs, by cutting jobs across all media platforms. Precarity is growing among journalists, with more  colleagues working on short term contracts and more freelancers being given worse conditions. Globally the quality of information to the public is declining.

To reverse this situation, the EFJ needs to show more solidarity with unions facing social and economical difficulties (in Greece, eastern and central Europe, etc).  We need to increase our help to affiliates to get back their member’s rights. More widely, solidarity must be the main goal between IFJ regions to counter isolationist tendencies.

With IFJ, EFJ should mobilise its affiliates to defeat impunity. The death toll in 2015 among media workers totalled 105. Last year In France we paid a heavy price after the Charlie Hebdo kiliings. We are grateful to all unions and colleagues who showed us strong solidarity.

We shall not give up pursuing the enemies of press freedom in Russia, Azerbaidjan, Turkey and elsewhere. We must continue with the campaign to free our Turkish and Kurdish colleagues (there are currently 32 in jail). We must not tolerate the silence of European leaders while the AKP regime persecutes Can Dundar and Erdem Gül and takes control of Zaman newspapers and others.

As the EFJ together with our affiliates, we have to denounce hate speech in media, as well as  populism and discrimination against refugees and migrants.  We should welcome the efforts made by our Russian and Ukrainian colleagues to maintain and strengthen contacts and solidarity during the continuing crisis between those two countries.

Concerning EU’s policy on media, lobbying is not enough to protect our rights. Unifying  our strength with the ETUC, the ILO and various international federations (musicians, creators, etc) is needed. For instance, the winning the debate in the European Parliament against the trade secrets directive is key to prevent new breaches of our rights as journalists, as trade unionists and those of our sources, often whistle blowers.

We should be grateful to those journalists who published the Panama papers. Many of us believe that if the new EU directive is agreed this month, such publication could not be possible in the future.

We need to be on the front line of action to prevent such laws or directives imposed by the EU or national governments which attack freedom of expression using the cover of the so called ‘fight against terrorism’.

In the next three years  we will face more threats against our basic rights : authors rights, collective bargaining rights, union rights, and protection of sources. We will need to campaign strongly against the growing precarity of journalists, as media owners seek to drive down pay and conditions.

We should also continue to work with our colleagues from BREG (the broadcasting expert group) on the future of the Public Service Broadcasting, not only because of jobs redundancies and shrinking budgets, but also because of increasing political controls being placed on public service TV and radio as in  Poland, Turkey, Hungary etc. This has to be resisted.

In conclusion, defending journalists rights together with EFJ’s affililiates is not our only task, but it remains one of the major keys to achieve good quality iournalism and pluralism, two important pillars of democracy.