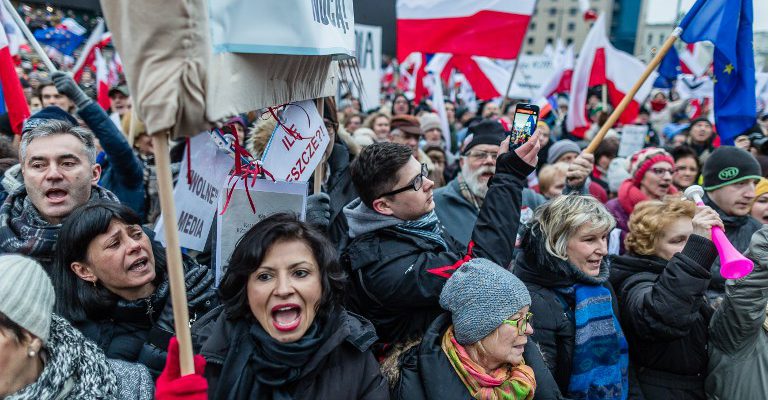 
First Hungary and now is Poland threatening Europe’s media freedom. Regardless of the safeguard of European Fundamental Rights charter and declaration, governments attempt to influence media will inevitably threaten our democracies.

On Thursday 7 January, the president of Poland ignored core EU fundamental rights including press freedom by signing one of the most criticized media laws in the history of the EU. Following that, the EU Commissioner Günther Oettinger has openly criticized Poland for infringing “common European values” by passing legislation that gives the government control of the state media and the power to directly appoint the heads of public broadcasters. The Commission’s First Vice President Frans Timmermans has also asked for clarification after Polish government has passed the law. The gravity of the situation has made the European Commission to put it on the agenda for the next meeting on Wednesday 13 January with the aim to assess whether the new law will pose “systemic dangers to the rule of law”.

The EU Charter of Fundamental Rights Article 11 is the guiding principle for media freedom and outlines:

11.1: Everyone has the right to freedom of expression. This right shall include freedom to hold opinions and to receive and impart information and ideas without interference by public authority and regardless of frontiers.

11.2: The freedom and pluralism of the media shall be respected.

The new media law clearly violates these core principles, which Poland in fact has committed itself to respect. According to the new law, the Minister of Finance has the full right to appoint and sack senior figures in the public media. This created fears among journalists that it would result in a purge of dissent journalists working for the public media. Some will stay, and some will be replaced, and the government will de facto be in charge of the newsroom.

In 2013, the European Commission published a report on media freedom and pluralism written by experts at a High Level Group. Among the many recommendations in the report, two recommendations concern about the public media. They are:

Any public ownership of the media should be subject to strict rules prohibiting governmental interference, guaranteeing internal pluralism and placed under the supervision of an independent body representing all stakeholders.

The Audiovisual Media Services Directive, the main EU legislation in this field is committed to safeguarding the independence of national media regulators.

It is high time for the EU to show leadership. If not, European media will be on a slippery slope and so will our democracies, and the credibility of the EU.

Lessons shall be learned from the past. In 2003, The EU allowed the Italian then Prime Minister Berlusconi to control the media in a way that Italy, if it had been at the time an applicant country, it would not have fulfilled the criteria for becoming an EU member.

In 2011, Hungary passed a media law giving a centralized council the authority to impose fines that are up to 700.000 € on media that publish content against the public interest or common moral values. Again, the report from the High Level Group is very clear on this and it strongly recommended media self-regulation.

Now Poland and what’s next?

How can we make sure the government in Turkey to respect free media and stop interfering in the media if we do not act on Poland, an EU member? Now it is up to Commission to re-affirm the importance of EU fundamental values and the rule of law by taking action against Poland.

Poland has argued and so have one of the Polish journalists’ organizations, that this new law is an interim measure and that the situation might be improved within a few months. However, this cannot in any way justify what the Polish government has undertaken. The problem is that the government in the meantime will have all the possibilities to influence the media and this influence will continue to exist.

This article is written by Mogens Blicher Bjerregård, the EFJ president.