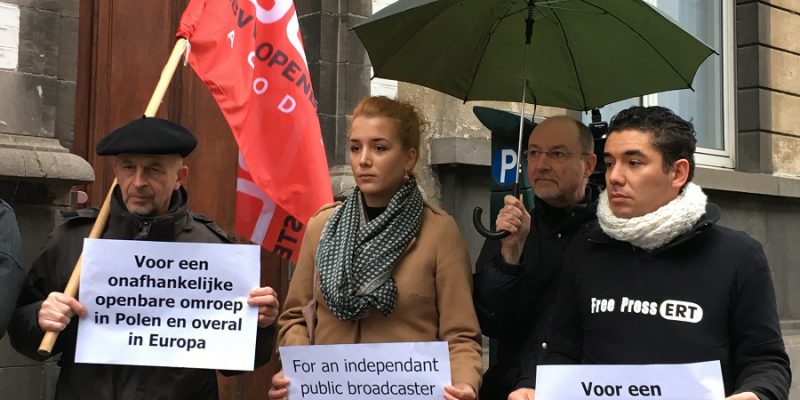 
Journalists, broadcasters and media freedom organisations have gathered this morning (13/01/2016) in front of the Polish Embassy in Brussels protesting against new attempt by the Polish government to control the media while the European Commission was discussing possible action against Poland. 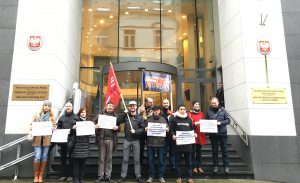 The EFJ has been heavily criticising the new law in the past weeks accusing Poland of violating European law on media freedom. It has written to the European Commission calling for prompt action against Poland. Today, the European Commission has discussed the first time at its college meeting the case of Poland and decided to launch action against Poland under the Rule of Law framework.

Following the college meeting of the Commission this morning, Frans Timmermans, the First Vice-President of the Commission announced that a preliminary assessment will be carried out within the EU’s Rule of Law Framework. In the following weeks, the Commission will enter into a “structured dialogue” with the Polish government to further assess the situation in Poland.

The EFJ welcomes the first step taken by the Commission saying, “The move is the first of its kind. This will hopefully send a strong message to Poland that being a member of the EU requires the respect of the Rule of Law and the Charter of Fundamental Rights.”

Speaking in the protest, Ricardo Gutierrez, EFJ General Secretary, has called for firm action from EU institutions to guarantee the independence of public broadcasting service in Poland. “What’s happening in Poland is not a only a Polish issue, it’s also a European issue as we must maintain a pluralistic and independent media in Europe.” said Ricardo.

Luk Vandenhoeck (ACOD) said “our democratic principles are too important to be left over without resistance. It’s not because a party had a wrong idea in his electoral programme that this idea become true after the elections. And it’s not because previous government did a wrong thing in the past that it can be justified to do the similar wrong step today”.

#Poland Media law @TimmermansEU: “I have just signed a letter inviting Polish Govt to a dialogue on these questions” https://t.co/xBBvG8NIXL