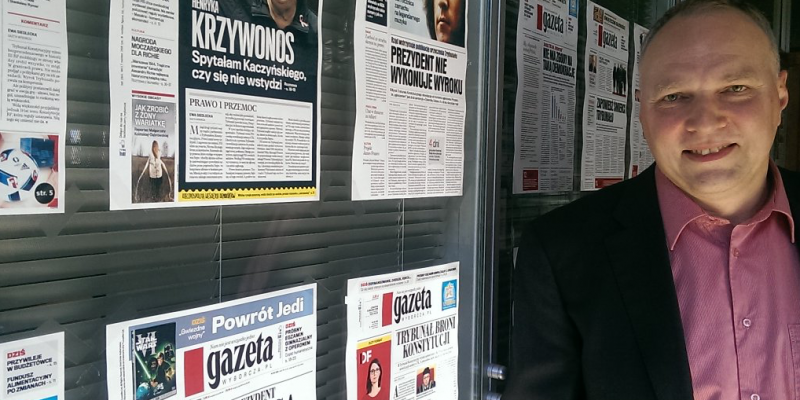 
WARSAW, Feb 1, 2015 – The European Federation of Journalists (EFJ), the European Centre for Press and Media Freedom (ECPMF) and the International Press Institute (IPI) completed a two-day fact-finding mission to Poland by calling on Polish journalists to stand together in defence of principles of press and media freedom.

The group’s call came after the newly elected Polish government rushed through controversial changes to the country’s public service broadcaster that have deeply divided the journalistic community. The changes, in the form of an amendment to the Media Law, allow the Minister of State Treasury to directly appoint and dismiss at will members of the broadcaster’s supervisory and management boards. Passed by the Parliament in a late-night sitting in December and signed by President Andrej Duda on January 7, the amendment has sparked international concern and protests across Poland over what critics see as the removal of checks and balances necessary to guarantee the broadcaster’s independence.

The amendment is set to expire at the end of June and the government has announced plans to pass a new media law. Numerous observers view this process as part of a series of significant and systematic legislative changes – including a recent measure curtailing the power of the Polish Constitutional Court – that challenge democracy and pluralism in the European Union’s sixth-most-populous member state.

Since the changes took effect, dozens of journalists working for the broadcaster have been dismissed or resigned in protest at the perceived government interference. Several journalists met by the group alleged that their names had been placed on a blacklist by the current governing party to be targeted for dismissal.

Mission delegates met with a wide range of actors among journalists, lawyers and civil society activists, including representatives of Poland’s leading journalist associations. While many journalists consulted saw the amendment as anti-democratic and the first step in turning the public broadcaster into a government mouthpiece, others welcomed the changes, claiming that the previous government had also used public television and radio as a political tool to advance its agenda.

“We recognise that Poland’s public broadcaster has for many years been seen as a political pawn and a prize for the governing party,” the group said. “This must stop. Nevertheless, past wrongs do not justify the passage of legislation that conflicts with international standards for press and media freedom. The amendment clearly falls short of these standards and represents a step backward for public broadcasting in Europe.

“We will be closely following media-related developments in Poland over the next few months and look forward to continuing dialogue with Polish journalists of all political persuasions in the common interest of protecting media freedom. Our fact-finding work itself will continue and we encourage all parties to report violations of media freedom to the international community.”

The European Centre for Press and Media Freedom (ECPMF) is an independent cooperative that coordinates press freedom initiatives across the whole European continent.  Press freedom violations can be reported to the ECPMF using a secure and encrypted channel via secure@ecpmf.eu/PGP-Key: 91E78456

The International Press Institute (IPI) is a global network of publishers, editors and journalists dedicated to the promotion and protection of press freedom worldwide. Based in Vienna, IPI has members in more than 120 countries.