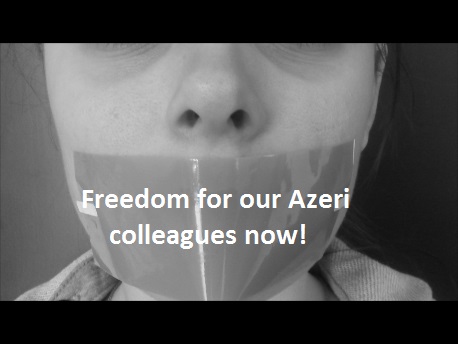 
Prominent Azeri journalist Rauf Mirkadyrov has today been released following a suspended sentence of five years handed down by the appeals court in the capital, Baku. The International and the European Federations of Journalists, (IFJ) and (EFJ), while welcoming this development, insist on the full acquittal of the journalist, who has been in jail since April 2014 and accused of high treason for spying for Armenia.

The political correspondent in Turkey for the independent Russian-language newspaper Zerkalo (Mirror), Rauf Mirkadyrov, has today received a suspended sentence of five years after the court threw out the initial six-year jail conviction, his lawyer Fuad Agayev told media.

The prize-winning journalist, 55, was arrested in April 2014 in Baku after being deported from Turkey, where he had been based for several years and published articles critical of both the Turkish and Azerbaijani leadership. In December 2015, he was accused of spying for Armenia and found guilty of high treason. Mirkadyrov was condemned to a six-year jail term in a case his supporters claim to be politically motivated, media added.

“I am innocent and will be fighting for my full acquittal,” Mirkadyrov told journalists after his release, a position that both IFJ and EFJ strongly support.

In recent years Azerbaijan has developed a reputation as one of the world’s worst jailers of journalists. As the IFJ and the EFJ have repeatedly denounced, numerous journalists and human rights activists fell victim to a deliberate campaign to silence critical voices particularly in the build up to last year’s ever European Games that took place in the country in June 2015.

In addition to jailing journalists on trumped up charges the government has successfully squeezed what remains of the ‘independent’ press through a range of mechanisms, including excessive financial penalties imposed on media, government control over the advertising market and restrictions of the national distribution and printing systems.

The IFJ and EFJ warned that the continued incarceration does great damage not only to the country’s reputation, but also to its aspirations of becoming a modern, stable democracy with international standards of human rights and respect for freedom of expression.