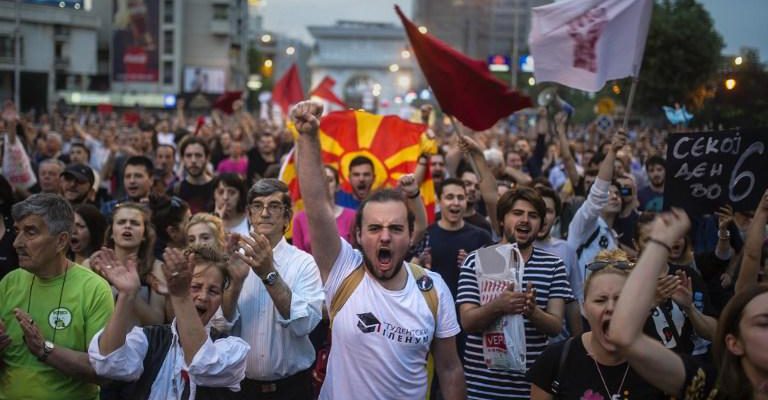 
A journalist and four photo reporters were gravely injured by armed police forces on 13 April in the capital, Skopje, while covering an anti-government rally, IFJ and EFJ Macedonian affiliates SSNM and ZNM reported.

The protests were sparked by President Gjorge Ivanov’s dual announcement of early elections and a halt to the inquiry into the wiretapping scandal that broke in February 2015 when it was alleged the government was illegally wiretapping over 20,000 people including journalists. Thousands of protesters took to the streets of Skopje, demanding the President either revoke his decision or resign.

The Trade Union of Macedonian Journalists and Media Workers (SSNM) and the Association of Journalists of Macedoni (ZNM), two IFJ and EFJ affiliates, reported that during the clashes, journalist Goran Naumovski, working for Plusinfo, and photo reporters Ognen Teofilovski (Vest), Nake Batev (Vecer), Tome Georgiev (Fokus) and Borce Popovski (Sloboden Pecat) were attacked on 13 April by the police, who wanted to prevent them from taking pictures of the violent turn of the protest. The union also said that all of them were wearing professional IDs and that the cameras they were carrying clearly identified them as journalists on duty. Other colleagues, including Trajce Antonovski and Saska Cvetkovska, from NOVA TV, were injured by stones being thrown at the police.

SSNM and ZNM also reported that a significant number of women journalists were also brutally pushed, dragged, obstructed or subjected to other forms of violent and brutal treatment by the police.

The International and European Federation of Journalists, representing more than 600,000 journalists in 139 countries, joined SSNM and ZNM in condemning these brutal attacks. Both Federations submitted this case to the Council of Europe’s platform to promote the protection of journalism and safety of journalists.