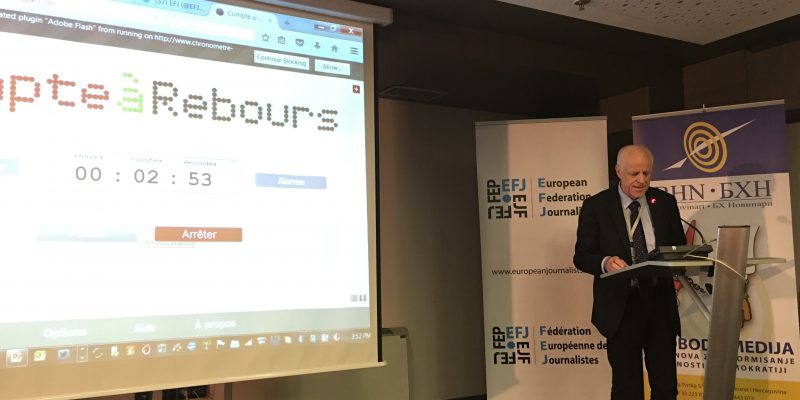 International solidarity among journalist unions and association is of huge importance as cross border activities in Europe are constantly increasing.

Being in Sarajevo listening yesterday at the pre-meeting to the challenges and encouragement you have in Bosnia & Hercegovina, the Balkans, The South Eastern Europe, there is an inspiration of hope. You have the severe problems in collective bargaining, in getting journalists to understand at all, that they have rights, but it is impressive to understand how meet this. After several conferences in this region of Europe, I can see a development of engagement, and this is a very important step.

Because of that among other activities, I am happy to emphasize that the European Federation of Journalists has succeeded in being a strong recognized core organization regarding journalism, media and press freedom in Europe. We have been able to strengthen our partnership with more organizations, NGO’s as well as European institutions. With limited resources, a small but hard-working and successful secretariat and a political commitment in our Steering Committee, our expert groups and among you, delegates and observers from our affiliates:

All of this in transition times for media. Free and independent media, investigative journalism, guidance through a still more complex media landscape, which develops and changes more rapidly than ever, need of pluralism in time of conflict, fear and uncertainty for the future – all of it urge our democracies to understand the need of high quality journalism.

The labor market is changing in the media industry. Nowadays we hear more often news about job cuts rather than new job opportunities in the media. However, the reality is that there are new jobs out there in our industry. Journalists do find new jobs and more members are becoming freelances and even entrepreneurs creating their own media platforms.

We must realize that the return of the “good old days” will never happen in the rapidly changing media landscape. Rights and jobs of journalists go hand in hand and unions play an important role in this. We are there not only to defend their rights but also to help them succeed in a changing and competing job market. Without a thriving media job market with a diverse and quality journalism, our democracies will be at risk.

Engaging with our member, through an EU funded project, the EFJ has developed the Rights and Jobs in Journalism project to address this important issues among our affiliates on recruitment, collective bargaining, freelances and authors’ rights. We are now better off to focus on where our members are and where the future jobs are.

While working closely with our members, the EFJ pushes our agenda in the interest of journalists among European institutions and policy-makers. During the last 10-12 months regarding authors’ rights, we have met with industry stakeholders and European policy-makers. The issue is pressing before the EU introduces legislation within the framework of the digital single market, which would serious challenges for authors’ rights for journalists.

Therefore, we at all levels have tried to influence the coming directive. In partnership with other authors’ organizations, together with the publishers where suitable, in the context of IFRRO, the global organization for Collective Management Organizations and as added to the visual artists, we – and I have prioritized to be present as much as possible – have met several commissioners, representatives from four cabinets, and most recently the cabinet of Juncker.

This topic is also about fair contracts as we have used huge efforts to make the commission giving this a priority as well. I am pleased to tell you that in my perspective the rhetoric has changed as the commission now has a friendly attitude to licensing models and extended licensing where we have developed that model, and we see the term remuneration replaces compensation trying to avoid new exceptions and limitations. Yet, we are not only waiting for the proposal postponed and expected the third week of September, we will continue lobbying, and when the proposal is on the table we should provide our affiliates to influence the legislators in your countries.

This is an example on how we deal with and influence on European legislation. Other topics are Trade Secrets and TTIP, which already were on our agenda at the annual meetings in Moscow as well as in Budva.

Everybody must be convinced how important it is to maintain investigative journalism regardless of the field of business, trade, legislation and administration. LuxLeaks and Panama Papers are the most recent examples of this. Therefore, I want to emphasize that our small office in Brussels during negotiations, plenty of meetings and collaboration with other parties has achieved to bring in important exceptions for journalists to the trade secret directive, which I know still remain a question concern on protection of whistleblowers.

Our next steps are

In the same manner we have been working regarding TTIP perhaps less successful but also difficult to measure. Fortunately, we know that big trade unions in particular have been busy ensuring our rights as collective bargaining not been abolished.

The complexity of media in Europe is a part of our pluralistic society respecting cultural diversity, a prerequisite for democracy. Therefore, we should not accept, when governments strengthen media laws diminishing press freedom as we recently saw it in Poland by an interim public media legislation – an amendment in defiance of international standards regarding public broadcast. In this particular case, the EFJ experienced divided approaches among our affiliates in Poland.

That was the background for the partnership fact-finding and solidarity mission, we decided to carry out together with the IPI and the brand new organization, the European Center of Press and Media Freedom. The statement from the mission illustrates that Poland historically has a biased system, but that should never justify such a change in legislation breaking the principle of keeping at arms’ length.

Public Service Media meet challenges in several European countries and is an example of a topic where we should act carefully as we in a pluralistic media landscape need both strong public service, strong private media and an undergrowth of innovative newcomers. A task for EFJ could be to provide a fruitful dialogue inside the European media industry to replace the existing fight between private and public media with the real battlefield between a European pluralistic media market and the dominance from the big American players.

I am not saying that we shall fight Google, but we must insist that they as well as European media should follow ground rules, which means respecting authors’ rights including ensuring remuneration, social dialogue and ethical code of conducts.

Self-regulation is in my view the only way to ensure press freedom as the only alternative is state regulation leading to censorship. This is unfortunately the case in too many European countries, where safety of journalists and fighting impunity are among the most important topics.

It is appalling to see how journalists are treated in certain countries and not least the part of Europe, where we are right now. We get promises as in Macedonia but we do not see results. In Greece, the journalists covering refugees meet new obstacles. In Spain press photographers risk punishments taking photos in public area, and even in my own country Denmark the police detained a press photographer while he took photos of refugees walking on the highway.

Turkey and Azerbaijan have the biggest jails in Europe for journalists. In Turkey, which remains our biggest problem, in the midst of a very oppressive and challenging environment where we only get to hear bad news like imprisoned journalists, foreign correspondent banned from the country, media crackdown, massive laid-off, our affiliates have managed to inform us, to attract new members, to help colleagues in danger and to welcome our international observers.

This kind of platform has a significant impact because it urges the authorities to respond which brings visibility to the cases, and we can disseminate the information in a much reliable way. It also provides us a comprehensive material for our applications for new needed and demand-driven projects in Europe.

During three years, we have managed to create an independent EFJ with a sustainable budget. We have successfully employed a full time general secretary in lead of a fantastic staff including the IFJ staff dealing with European matters. It has also been extremely important to build the bridges to enhance mutual understandings regardless of cultural differences. These factors are prerequisites of the results we have achieved.

To continue and to develop our organization, the financial basis is crucial. This concerns me when I look at the figures, as our income does not follow the expenses. For 2016 and 2017, EFJ will survive mostly as now, but from 2018, we face difficulties, if we do not address the challenge now. This will be on the agenda under the finances.

The EFJ has made many milestones in the past three years, and many of them thanks to your contribution as members. We all want the EFJ continue to be a strong voice representing journalist organizations in Europe to make a difference in the lives of journalists. To do so, we need the continuous support and commitment by a strong European unity among all of us to strengthen this voice.