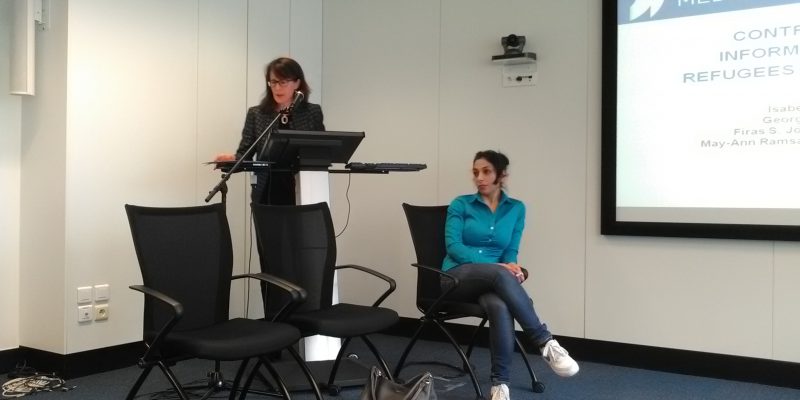 
How can Public Service Media contribute in a positive way to the refugee crisis? This was the question asked by Nicola Frank, European Broadcasting Union (EBU) Head of European affairs, during the discussion organised by the EBU yesterday (April 27), where the European Federation of Journalists (EFJ) was invited.

Information for and about refugees are two sides of the same coin: on the one hand, newcomers need to have access of basic information when arriving in a host country. On the other hand, local residents need to better understand the stories of these refugees. Informing both sides is essential for social cohesion and this is one of the role of Public Service Media.

Journalists from Greece, Germany and Sweden presented three examples of portals providing information to help both refugees and local population to deal with the situation.

EU correspondent George Syriopoulos presented ERT4Refugees, a platform which provides information to the state, to humanitarian organisations helping refugees, but also to Greek citizens. “ERT is trying to contribute in a positive way to the refugee crisis. It is the least we can do“, he said.

German journalist Isabel Schayani (ARD) talked about WRDforyou, a website launched in January providing first aid information and streaming assistance in four languages. Using social media was an evidence for her: “The best way to reach refugees is online, on Facebook. It is where life is“.

Sweden is also in front line in this refugee crisis. Swedish Radio started Syrien inifrån, a radio programme hosted by Syrian journalists who fled the war and arrived in Sweden. To Rafa Almasri, giving the floor both to Syrians living in Sweden and to those who stayed in Syria is primordial: “It is important for the Swedish society to know who we are and to show how the newcomers start their life in Sweden“, she explained.

May-Ann Ramsay, senior expert at the European Commission’s Directorate-General Migration and Home Affairs informed about the European Commission’s policy. “Immigration is the next challenge and we need to deal with it”, she said. “But we need to take into account the different situations in our strategies: some refugees fled their country because of the war, others because of persecution for religious belief or indecent living conditions.”  The EC plans for 2016 are ambitious: “We plan to have a system based on more solidarity, with more relocations and resettlements, as well as a better functioning of Schengen. But this is a global problem, not a European one“, she concluded.