40 % of Serbian journalists wants to leave the profession 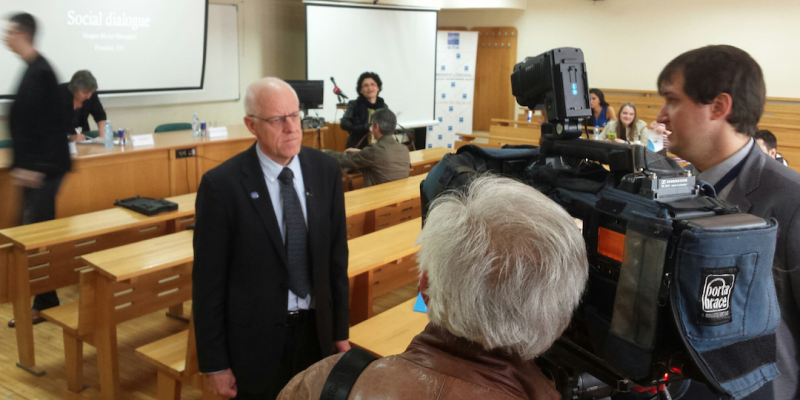 
Journalists Union of Serbia (SINOS – EFJ affiliate) in partnership with the Friedrich Ebert Foundation held a seminar in Prolom Banja (Serbia) from 19 to 21 May. The theme of the was organising unions for media workers in Serbia and the Balkans countries.

The participants talked about precarious work, legal and social status of journalists and the sustainability of trade unions in the media with multinational ownership problems. The President of the European Federation of Journalists (EFJ), Mogens Blicher Bjerregard spoke about the experience of organizing unions for journalists in different European Union member states. He stressed that progress is possible when state supported and private media companies are not be in conflict but allies to produce information. Bjerregard added that it would be desirable for media employees and employers to be partners in social dialogue.

During the debate session, many participants pointed out that there is no union in the private media sector in Serbia. Most employers do not even comply with the obligations of the labour law which directly resulted from the collapse of the status of media workers and the journalistic profession in general.

“Practice has shown that without solving their legal working status there is no independent and free media,” Dragana Čabarkapa, SINOS President, said.

Experiences from other countries in the region are very similar. It was concluded that organizing union of journalists and networking trade union organizations in this region is very much needed for exchanging information and experiences, with the aim of improving the status of journalists, reduce censorship and self-censorship and promote press freedom.

Tanja Jakobi held a lecture to media representatives. According to the findings out of 1.100 media workers more than 40 percent of journalists in Serbia wants to leave the profession because of pressure and poor financial and legal status.

The seminar, financially supported by FES, was attended by representatives of trade unions from Croatia, Bulgaria, Spain, Macedonia, Montenegro, Bosnia and Herzegovina and Serbia.