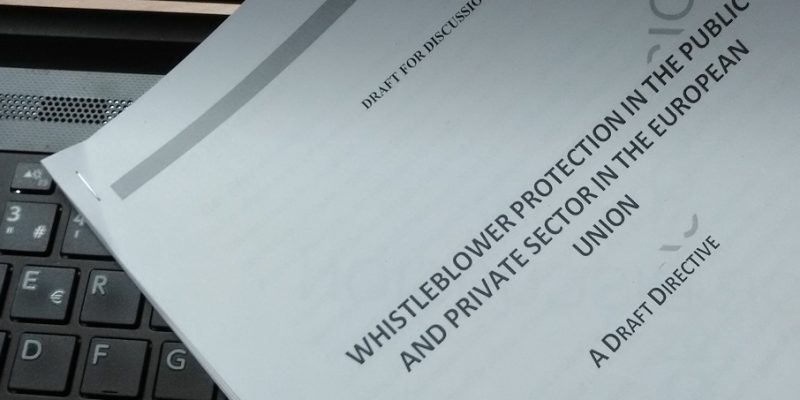 
Shortly after the adoption by the European Parliament of the trade secrets directive, the European Federation of Journalists (EFJ) has started to campaign for a EU legislation to protect whistleblowers.

The EFJ met with the Transparency and Democracy Campaigner of The Greens/ European Free Alliance in the European Parliament, Pamela Bartlett Quintanilla to discuss a draft proposal on “Whistleblower protection in the public and private sector in the EU”. This draft proposed on 4 May by the Greens/ European Free Alliance guarantees protection for workers, trainees and apprentices working in all sectors of activity who disclose information concerning harms or threat to the public interest. The protection includes exemptions from criminal and civil proceedings as well as disciplinary measures related to the protected disclosure.The draft directive also includes a yearly reporting mechanism and the creation of a EU database on whistleblowing.

The EFJ welcomed the draft proposal, although it expressed the need to widen the definition of the term “worker” in order to include freelancers. The Greens had sent this proposal to President Juncker calling on the Commission to introduce whistleblower legislation across Europe. The EFJ supports the Greens’ initiative asking the Commission to propose a legal instrument to establish minimum levels of protection in Member States.

The EFJ also met with members of the Social and Democrats who supported the initiative. In the Legal Affairs Committee (JURI), ALDE MEP Jean-Marie Cavada raised the issue of whistleblower protection and an own-initiative report will be probably drawn up before the summer. Right now there are consultations with legal services on deciding the legal basis.

Meanwhile, the EFJ has joined a campaign ”Whistleblowers need EU protection – lives, environment and money at stake“ initiated by Eurocadres, a trade union representing almost six million professionals and managers, together with the ETUC and other trade union organisations. The campaign calls on:

EFJ members can join this campaign by uploading their logo through this link. You can email Camille Petit (camille@europeanjournalists.org) if you have problem uploading your logo.