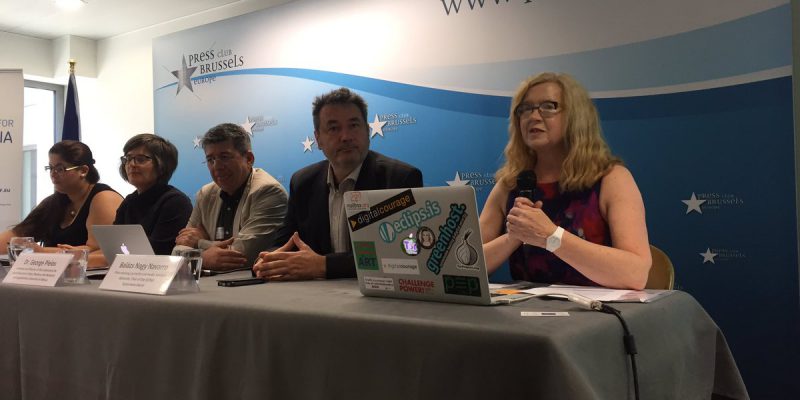 
The European Centre for Press and Media Freedom (ECPMF) organised on 9 June a debate about The truth about refugees – crisis, cover-up and the impact on media freedom at the Press Club in Brussels.

The refugee issue is currently putting media under pressure. On the one hand, biased reporting – both for and against refugees – has led to increase distrust in the media. Jane Whyatt, Project Manager of the ECPMF, introduced the debate with examples from Eastern Germany, where right-wing populist movements and left-wing extremists movements accuse the mainstream media of lying and biased reporting. “We are trying to support journalists in their quest to discover and publish the truth about refugees and to defend those who are attacked when they tackle this theme”, said Whyatt. Journalists in many countries are violently attacked and held back from reporting refugees.

In Hungary, journalists face similar difficulties in reporting about the refugee crisis. Hungarian prize-winning journalist Balazs Nagy Navarro spoke about violations of media freedom along the Balkan route. Navarro explained how difficult it was for journalists to report from the spot at the Hungarian-Serbian border in September 2015. At least eight foreign journalists were beaten up by the police. Yet they were peacefully reporting on the refugee movement. Since then, the ECPMF has investigated the attacks on-site and discussed the issue with state officials:

“The Hungarian government vehemently rejects our findings, stating that the police did not hit anybody and just lawfully used coercive force against a crowd which was attacking the Hungarian border and the border of Europe”, said Balazs Nagy Navarro.

In Greece, the media coverage evolution of the refugee crisis could be split into three stages according to George Pleios, professor at University of Athens.

“The first stage was build during the 1990s and was connected to migration from Eastern Europe. The media feared the spread of diseases, the arrival of djihadists, the damage of Greece’s image. From summer 2015, a different type of coverage was present which was more positive, connected to the Middle East refugees travelling to other EU countries. It was also thanks to celebrities positions and Aylan type cases. Finally, a third stage began with the closure of the Greek-FYROM border and the perspective of Middle East  refugees to stay in Greece for a longer time. This is enforced until today.”

The Syrian refugee journalist, Ola Aljari, now living in Germany and supported by ECPMF, went twice to Greece to report about the refugee crisis. According to her, the situation was very different when she got back to Athens two months later. She explained that people in refugee camps were resigned and had lost trust in media:

“The first time, most of refugees I met were full of hope despite the EU-Turkey deal that was announced a couple of days earlier. But for my second visit, I spent ten days in a camp next to the Athens port. Here I met disappointed and hopeless families stuck in Greece. They didn’t want to talk. They knew that media could no longer help them.”

During her stay, Ola Aljari met only one photojournalist in two weeks, who had difficulties in selling his stories about refugees: “He said media outlets are no longer interested in what is happening in Greece. They only want the stories that cheer people up, not the serious ones.”

How would you rate EU media coverage of refugee issues ?

Chiara Sighele, Project Manager at Osservatorio Balcani e Caucaso (OBC), emphasized the need to have a transnational monitoring system as well as the necessity to exchange good practices and she made a direct reference to the Idomeni Charter initiative launched by Greek journalists. She also underlined the media responsibility by explaining a tool called the Ignorance Index where public opinion is shaped by media coverage and how people in many EU members states where overestimating the number of migrants and muslims in their own country.