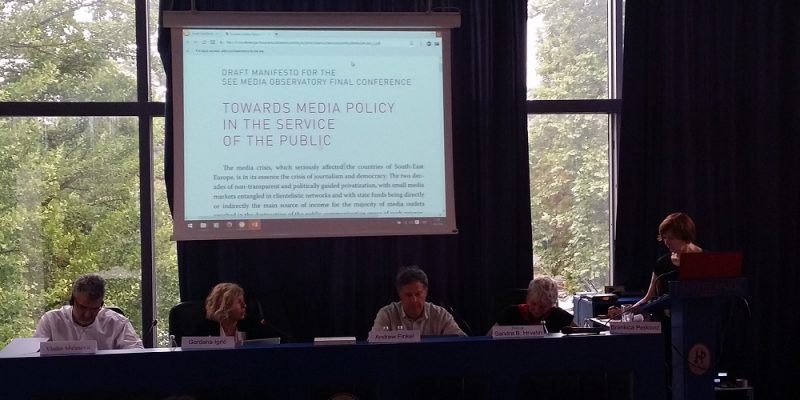 EFJ Steering Committee member Yannis Kotsifos participated on behalf of the EFJ in the final regional conference of the SEE Media Observatory, in Novi Sad (Serbia), on  June 13. A thorough analysis of factors determining the involvement of editors in achieving media integrity throughout the countries of SE Europe, along with other important findings of multiple research studies  were presented.

“Why media in the region don’t serve democracy?” was the main question throughout this 4 years project, with 10 countries involved, said   Brankica Petković, Peace Institute, Ljubljana, SEE Media Observatory project Coordinator, in the opening session of the conference “Alternatives: Media reforms for media integrity and future of independent journalism in the countries of South East Europe”.

The first reply was given in 2015  by the findings of the survey then published, regarding the ownership and finances of media in Turkey, Montenegro, Kosovo, Macedonia, Albania, Bosnia Herzegovina and Serbia (see them all here) and the key word of it was corruption.

The  reports published in 2016 (see them all here) are moving the debate forward to possible ways that journalists, and in particular editors, might establish models to support credible independent journalism, as a reply to the constant attempts  of the state/market/owners/politicians  to gain control over the information produced and distributed.

As Dunja Mijatović, OSCE Representative on Freedom of the Media said in a video message to the conference, “we keep talking about democracy but the attempt to control media is still there”. Moreover, she expressed fears that the slow process of the digital switch-over in some countries of the region might give space to an analogue hole in the flow of information. Mijatović suggested firm thinking and an approach based on principles are essential to achieve media integrity.

The findings of the survey for the editors’ role, as summarised and reported by Ilda Londo, Albanian Media Institute, member of the SEE Media Observatory research team, were not very encouraging though: No special protection for them by law, lack of internal regulation, lack of trust to associations that might have some ethics code,  the job itself is not a high profiled one anymore, and the political affiliation is still a reason to be hired or fired as editor in public media.

New funding models for journalism (there is a policy paper prepared that highlights some good practices), the possible differences between the golden ages of journalism and the crisis/internet/New Media – driven industry, raised some very welcome lively debates. Caelainn Barr, Data Journalist at The Guardian, very timely reminded everyone that in a way we could be excited with technology as it has to do with freedom of expression. This discussion served to highlight alternatives to current media systems, relations and practices which obstruct media integrity in the countries of South East Europe. In that view, a draft manifesto with the title “Towards Media Policy in the service of the public”, was distributed to all participants in order for everyone to be able to contribute with comment and amendments to what might work as an additional policy paper of this really important project, to be read together with the extensive Policy recommendations paper 2013-2016, released earlier.