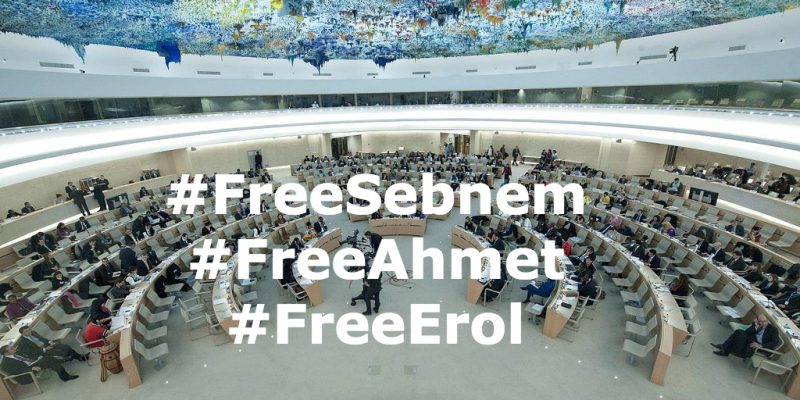 
The European Federation of Journalists (EFJ) has joined the oral statement delivered today (22/06/2016) by Reporters without borders (RSF) at the UN Human Rights Council in Geneva and also co-sponsored by the International Federation of Journalists (IFJ), PEN International, Article 19, the International Press Institute and 25 non-ECOSOC NGO’s to demand the immediate and unconditional release of Sebnem Korur Financi, Ahmet Nesin and Erol Önderoglu and to call for the withdrawal of all charges against all participants to the solidarity campaign with the Kurdish daily Özgür Gündem.

Reporters without Borders is stunned by the arrest of its representative in Turkey, Erol Önderoğlu, placed in pre-trial detention by an Istanbul court on 20th June 2016, along with two of his colleagues.

Erol Önderoğlu, Ahmet Nesin and Sebnem Korur Fincancɪ are accused of “terrorist propaganda” for having taken part in a solidarity campaign with the Kurdish daily newspaper Özgür Gündem. Along with fourty other intellectuals, they had been taking turns to symbolically assume the role of the newspaper’s editor who is the target of numerous prosecutions.

After being questioned by a prosecutor on June 20th, Önderoğlu and his two colleagues were immediately referred to an Istanbul judge, who ordered they be placed in pre-trial detention.

Erol Önderoğlu is being prosecuted on the basis of three articles published by Özgür Gündem on 18 May about power struggles within the various Turkish security forces and the ongoing operations against Kurdish rebels in south-eastern Anatolia.

RSF’s representative in Turkey since 1996, Önderoğlu compiles quarterly/triennial reports on the state of freedom of expression in Turkey for the Bianet news website. He is a member of the board of IFEX (the International Freedom of Expression Exchange) and often works with the Organization for Security and Cooperation in Europe (OSCE) and several other international organizations.