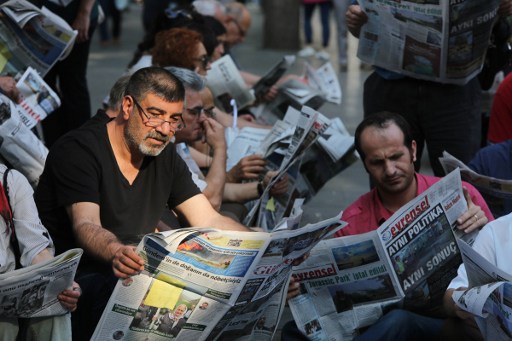 
UPDATED 27.07.16 An ongoing crackdown on the media in Turkey has led to the arrests of more journalists and raids on their homes. The International and the European Federation of journalists (IFJ/EFJ) today denounced the deterioration of democratic rule, of which press freedom is one of the pillars.

On 22 July, Zehra Dogan, painter and editor at women’s news agency JINHA, was arrested by police in Mardin, south-east of Turkey. She was taken to the Nusaybin police office the following day. During the interrogation, she was accused of “being a member of the terrorist organisation PKK.”

On his twitter account Bülent Mumay tweeted: “The only organisation that I’m a member of is [the] Turkish Journalists Association [TGC]. My only profession is journalism”.

Among those targeted by the warrants was prominent journalist and former parliamentarian Nazli Ilicak who was fired from the pro-government Sabah daily in 2013 for criticising ministers caught up in a corruption scandal, NTV and CNN-Turk reported.

IFJ President Philippe Leruth said: “Since the failed coup we have had to react even more against the media crackdown in Turkey. The new arrest warrants revealed today are aimed, one more time, to target journalists who are doing their jobs, criminalizing the journalistic work. The Turkish people that went on the streets on 23 July were showing their attachment to democratic values through their attachment to authorities elected by votes. Press freedom is an essential component of democracy. And clearly, it is even more at stake today.”

EFJ President Mogens Blicher Bjerregaard said: “We call again on the NGOs and the international community to put pressure on the Turkish government to reinstate a rule of law. More and more journalists are facing intimidations, arrests or imprisonments and this purge must stop immediatly. We stand in solidarity with our Turkish colleagues.”

In a sign of unrelenting targeting of media, the Turkish authorities have banned publication of the special edition of the satirical magazine LeMan after a court issued order on 20 July stopping the printing and distribution of the issue. The following day, 300 staff at the Turkish Radio and Television Corporation were suspended from their jobs as part of the investigation into the Fetullah organisation (FETO) – named as a terrorist organisation by the government- reports said. In the meanwhile, 60 reporters, including editors, reporters and technical staff were fired from the Cihan news agency by the Court-appointed trustees.

Turkey has declared a three-month state of emergency and detained more than 13,000 people in the military, judiciary and other institutions following the failed coup aimed at toppling President Recep Tayyip Erdogan on 16 July. Under the state of emergency, Turkish authorities can hold suspects in detention without charge for up to 30 days before they are taken to a judge to decide whether to remain in jail.