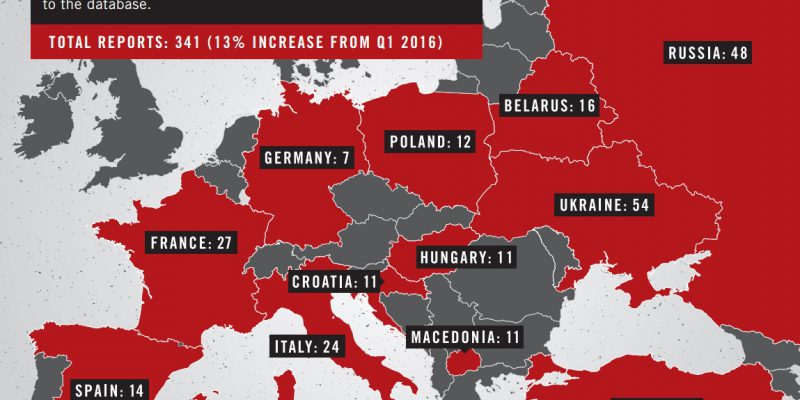 
Violence against journalists in Europe increased in the second quarter of 2016, reports submitted to Index on Censorship’s Mapping Media Freedom platform show, as a government crackdown in Turkey intensified and protests turned violent in countries from France to Finland.

Between 1 April and 30 June 2016, Mapping Media Freedom’s network of 18 correspondents and other journalists submitted a total of 341 verified reports of violations of press freedom to the database, a 13% rise over the first quarter of 2016.

The platform — a joint undertaking with the European Federation of Journalists and Reporters Without Borders, partially funded by the European Commission — was established in May 2014 to document threats to media freedom across Europe. It covers now 42 countries, including all EU member states, plus Albania, Azerbaijan, Belarus, Bosnia and Herzegovina, Iceland, Kosovo, Macedonia, Montenegro, Norway, Russia, Serbia, Turkey and Ukraine.

During the second quarter of 2016:

“Europe is considered one of the safest places for journalists in the world. However, increasing concerns about national security in the region – coupled with creeping authoritarianism – is making it an increasingly difficult place for the media to operate freely and safely,” said Hannah Machlin, project officer for Mapping Media Freedom. “And the threats are not just coming from the usual suspects: 12 incidents of injuries to journalists occurred in France and in a number of these cases journalists appear to have been targeted by police.”

The second quarter saw journalists targeted while covering demonstrations. “Journalists have been caught between some violent protesters and strong-arm police practices despite often wearing helmets and other articles that clearly identify them as members of the press. These incidents point to an acute need for training for front-line members of law enforcement across Europe,” said Melody Patry, senior advocacy officer for Index on Censorship. “This would include respecting the right of media professionals to perform their public-interest role of monitoring and reporting the news during protests, including on police conduct.”

According to the reports, media professionals and outlets were blocked from reporting in 73 verified incidents. “We are witnessing a resurgence of censorship in all its forms,” Ricardo Gutiérrez, EFJ secretary general, said. “Governments, even in the ‘old Europe’, do not hesitate to block websites, ban publications or bar access to journalists. Citizens must realize that it is their right to be informed that is so fundamentally challenged. They must not forget this when they elect their political representatives.”

A total of 45 criminal charges and civil lawsuits were reported to the platform. “The fight for the abolition of prison sentences for offences committed through the press is unfortunately still relevant in Europe and neighboring countries,” Christophe Deloire, RSF secretary general, said. “In a climate of growing fear and suspicion, judicial persecution of journalists takes more and more diversified forms. The Turkish authorities continue to invoke the anti-terrorism law, the protection of state secrets or insults to the head of state to prosecute and imprison more journalists.”

The full report is available here.

The report is also available in PDF format:. 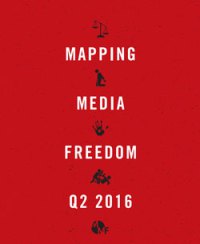