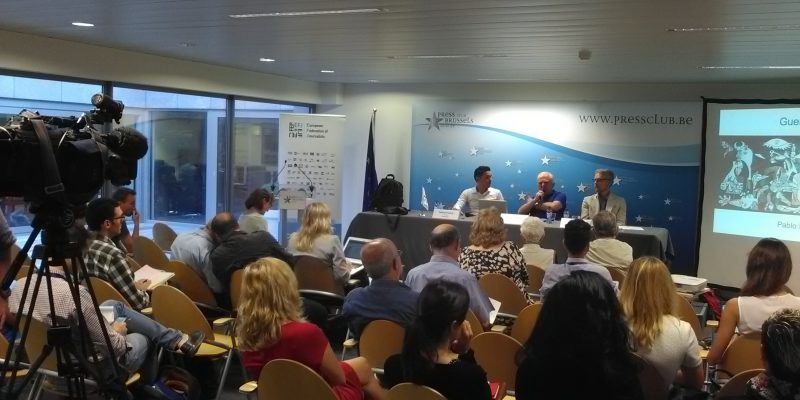 
The European and International Federations of Journalists (EFJ/IFJ) organised a press conference on 12 September on the theme: Turkey’s failed coup: implications for journalists, unionists and human rights activists at the Press Club in Brussels.

Sanar Yurdatapan, a Turkish composer, human rights activist and initiator of Freedom of Expression Initiative-Turkey, was invited to speak about the prior and post-coup situation for freedom fighters. After showing a video footage showing the escalation of hate speech at the highest level in the country, he gave a brief picture of today’s Turkey where oppression, insults and threats towards media, activists and opposition parties have become a common place. The speaker was also challenged by the moderator to give concrete solutions and share the expectations of the civil society :

“Independent media in Turkey can be counted on the fingers of one hand. That is why we need to raise awareness among the civil society. It can help us. Trying to influence heads of state via citizens actions for example could be a first step in the right direction”, he said.

He also presented the Freedom of Expression network of Turkey, a structure opened to contributions from individuals who want to act together. It encompasses civil disobedience, case court observation, seminars or filling judicial request to record the actions in state archives.

Oliver Money-Kyrle, IFJ assistant general secretary, recalled the need to monitor violations and to show international solidarity. “Ironically, Erdogan has been a great uniter for desperate journalists in Turkey as many different groups have been suffering under his rule. Despite all, the IFJ-EFJ has been able to support different segments of the journalist community and managed to achieve visible success”.

Mehmet Koksal, EFJ project officer, added that requests for support from journalists in Turkey has at least more than doubled since the coup attempt. The European Federation of Journalists (EFJ) counts 96 journalists in jail in Turkey at the moment, excluding those in detention.

@ollymk : "Erdogan has been a great uniter for all desperate #journalists in #Turkey" @IFJGlobal