Refugees and Migrants, the inconvenient truths – Journalism against bias and stereotypes 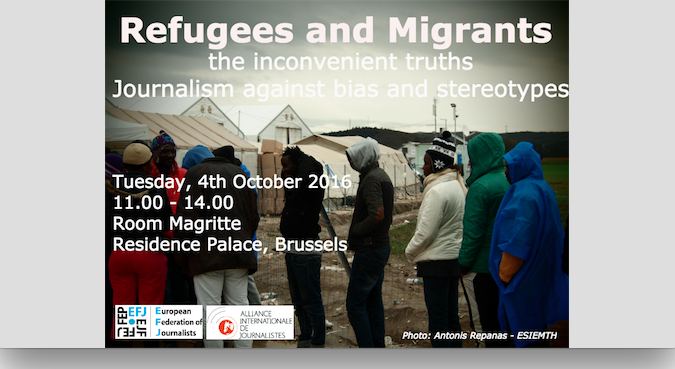 
The European Federation of Journalists (EFJ) and the Alliance Internationale de Journalistes (AIJ) are organising a roundtable discussion on Refugees and Migrants, the inconvenient truths – Journalism against bias and stereotypes in Brussels on Tuesday, 4th October 2016 from 11.00 – 14.00 at Magritte room (3rd floor) Residence Palace, rue de la loi 155, 1040 Brussels

Migrants and refugees have suddenly jumped to the top of the news agenda. During 2015 television screens and newspapers have been filled with stories about the appalling loss of life and suffering of thousands of people escaping war in the Middle East or oppression and poverty in Africa and elsewhere.

Migrants and refugees are a vulnerable minority who can quickly become scapegoats for the ills of society: social and economic decline, crime and unemployment, pressure on welfare services and lack of security; and what is unquestionable is that media play a crucial role in shaping a healthy public opinion on these issues.

The risk is to have a media coverage dominated by loose language, political bias, hate-speech, stereotyping and social exclusion of refugees and migrants, which lead to a climate of intolerance, xenophobia and racism.

The aim of this roundtable is to build a constructive dialogue between the media and organisations, NGOs and activists working with refugees and migrants, many of which provide vital information for journalists, and to draft a practical Guide on how best to communicate with journalists and media. At the same time the debate highlights the good and the bad journalistic practices in covering migration and the refugee crisis.

Four months ago, the Journalists’ Union of Macedonia and Thrace Daily Newspapers (ESIEMTH), an EFJ affiliate in Greece, drafted a proposal for the adoption of the Anti-racism Ethics Code of the Greek journalists called The Charter of Idomeni, in the name of the border control village where thousands of refugees are passing through to reach Northern European countries.

11.20 – Roundtable – Reporting on refugees and migrants: a challenge for journalism

12.20 – Roundtable – Organisations working with refugees and migrants, and media: how they can help each other.

There will be sandwiches served.