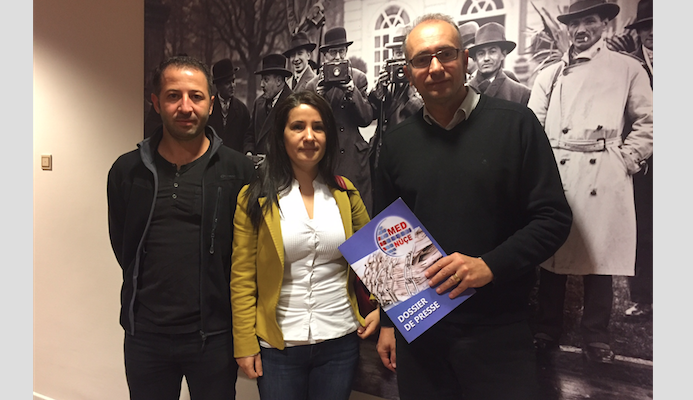 
The European and Federation of Journalists (EFJ) has received today (05/10/2016) a delegation of journalists working for Med Nûçe television. The signal of the Kurdish channel based in Belgium has been removed on Monday (03/10/2016 at 10:00) by Eutelsat SA, a French sattelite provider, on Turkish request because “the content is not in line with public order directives of the term’s between us as well as with the laws which regulate TV distribution in Europe and surrounding countries”. The EFJ strongly condemned the action considered as a media freedom violation and reported the case to the Council of Europe’s platform for the protection and safety of journalists and to Mapping Media Freedom project.  “We are calling Eutelsat management to re-establish urgently the signal of Med Nûce television and protect media pluralism, a fundamental value protected by the article 10 of the European convention on human rights”, said Ricardo Gutiérrez (EFJ General Secretary) during the meeting.

Med Nûce journalists said : “Eutelsat management remains vague about the accusations as they don’t say how and where, in which country, our television Med Nûce has done anything against public order. We are organising a press conference in Strasbourg to alert MEP’s followed by a protest action in Paris against Eutelsat decision”

Further more, the EFJ sent similar alert regarding the attacks against IMC TV, Hayatin Sesi and other 20 TV and radio channels removed by Türksat on government’s request. The banning of satellite channels was followed by violent detention of media workers and sealed building of media companies in Turkey.