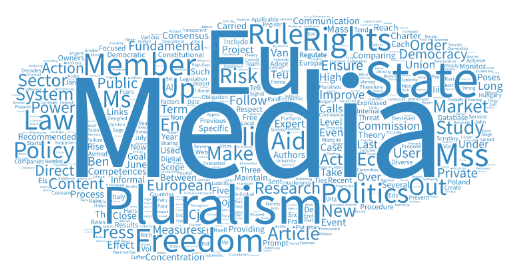 
The recently published study on  “A comparative analysis of media freedom and pluralism in the EU Member States“conducted research on Bulgaria, France, Greece, Hungary, Italy,Poland and Romania, all countries which have shown political pluralism at high risk, accompanied by heavy state interference in the media, or close economic ties between politics and media.

The 175 pages long study starts with the premise that any attempt to address media freedom and pluralism on a European level should be “intrinsically connected to the issues of democracy, rule of law and fundamental rights and should become part of a regular process of democratic scrutiny”. The report insists that the European Union is competent to issue legislation in this subject matter, as already stated by the High Level Group for Freedom of Information and Pluralism.

The Media Pluralism Monitor, should be continued and clear infringement procedures developed.

Six concrete recommendations are put on the table, including on public funding (state aid in media sector), transparency, enhancing the status of the journalistic profession, media literacy, platform providers and concrete proposals for amending the Audiovisual Media Service Directive, which is under review at the moment (see recommendation 3):

1. Adequate anti-concentration rules should be put in place in the market.
2. The necessary steps should be taken to enhance the level of journalistic profession in their countries, by encouraging journalistic self-regulation, promoting education,apply best practices in the field of journalists’ source protection.
3. Media literacy and cooperation with European Union programs should be promoted to enhance the level of media literacy among European citizens.
4. The independence of National Regulatory Authorities should be reinforced, ensuring the requirements of the Council of Europe’s Recommendation 2000(23) and Article 3 of the Framework Directive;
5. Cultural and social diversity should be ensured

.
The labour law status of journalists are also covered and the fact that many journalists are employed on short -term contracts, or intellectual property contracts, and do not enjoy the protection and benefits of labour law is seen as a problem.
Recent developments in Hungary Croatia, Poland and many other EU member states show the need for concerted action at EU level. The general crisis in the media and the increasing lack of funding for public interest journalism hand in hand with a rise of political extremism, nationalism and populism show the need of supra-national action according to the findings of this very appreciated detailed study commissioned by the European Parliament’s Policy Department for Citizens’ Rights and Constitutional Affairs at the request of the LIBE Committee.