Journalists call for lifting the ban on news channels in Turkey 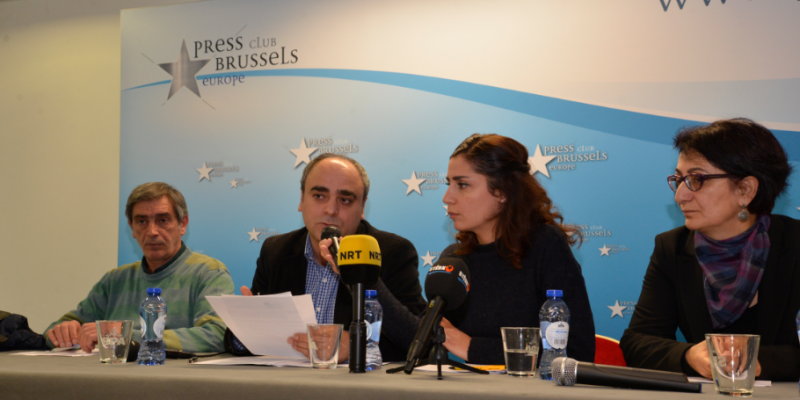 
The European and International Federations of Journalists (EFJ/IFJ) today organised a press briefing at the Brussels’ Press Club to protest the on-going clampdown on media in Turkey and to urge the government to lift the ban on news channels.

The Turkish government recently shut down about 20 TV and radio channels, including the Kurdish Channel Med-Nuçe based in Belgium that was removed on 3 October by Eutelsat SA, a French satellite provider, on Turkey’s request.

In Turkey, 90 journalists are in jail, more than 2,500 journalists lost their jobs and arrest warrants have been issued against hundreds of media workers since the coup attempt on 15  July.

Speakers invited to the EFJ/IFJ briefing included Füsun Erdogan, freelance journalist for TV and radio channels Bianet, Özgür Radyo and Med Nûce; Baki Gül, journalist at Kurdish Channel Med Nûce and Bayram Balci, journalist at Ozgür Gündem. They shared their personal stories and called on the international community to take action against the discriminatory measures that Turkish authorities are using to silence criticism.

“I’ve spent 8 years in prison under false accusations and without trial,” said Füsun Erdogan. “Our responsibility as journalists is to inform the public and to report what is going on in Turkey.” Füsun Erdogan said he was falsely accused of being a membership of a terrorist organisation in 2006. After spending 8 years in jail, she went into exiled in the Netherlands.

Baki Gül denounced the arbitrary way in shutting down his channel which broadcasted from Belgium. The workers of Med Nûce TV have called on European institutions to put pressure on Turkey to respect fundamental rights and have questioned the legitimacy of the suspension by the Higher Council of Audio-visual in Turkey (RTÜK) of the channel that broadcasts from Europe.

Ozgür Gündem journalist Bayram Balci recounted how he was arrested and called on the European journalists to stand in solidarity with their Turkish counterparts.

IFJ General Secretary Anthony Bellanger announced that both Federations will launch a solidarity campaign for Turkish colleagues, who are fighting to maintain their rights. “Turkey was the biggest prison for journalists in Europe before 15 July. Today, Turkey is, with China and Iran, one of the biggest in the world! We are not defending only free press or freedom of expression, we are defending human rights and citizen’s right to be informed,” said Anthony Bellanger, who also has called for global solidarity with Turkish journalists.

EFJ project officer Mehmet Koksal said that “The IFJ and EFJ have reported all the cases that took place in Turkey to the Council of Europe Platform for the promotion of journalism and the safety of journalists, and is keeping updated a list of jailed journalists in Turkey. It is a way of knowing how many days they have been in jail, so that we don’t forget them.”