EFJ and IFJ in solidarity with staff of Népszabadság 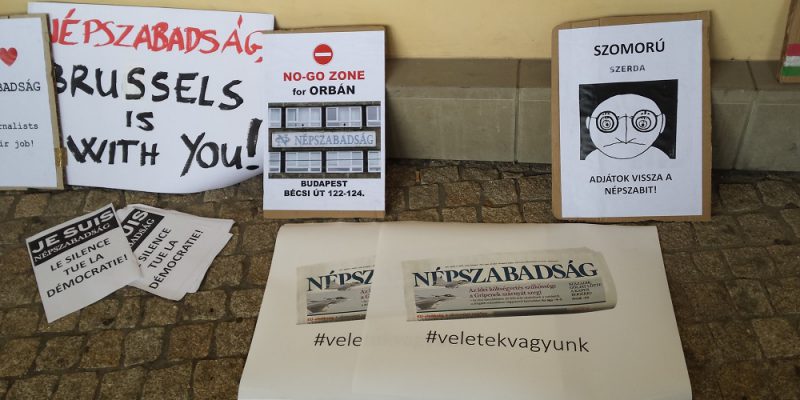 
The European Federation of Journalists (EFJ), the International Federation of Journalists (IFJ) and News Media Europe expressed today in Brussels their solidarity with the journalists from the Hungarian independent newspaper “Népszabadság” (Freedom of the People). The decision to suspend publication of Hungary’s biggest left-leaning daily broadsheet came out of the blue two weeks ago without the knowledge of staff.

Together with Anthony Bellanger, IFJ GS, Ricardo Gutiérrez, EFJ GS, participated today to a solidarity demonstration in Brussels, in front of the European Commission offices.

“Nepszabadsag is dead, victim of a murder planned in advance,” said the daily Brussels correspondent Katalin Halmai. She explained that the Hungarian government’s aim in shutting down Népszabadság was to cover up corruption and other harmful issues for the ruling party.

Since Viktor Orban came to power in Hungary in 2010, many print and online publications as well as radio and television stations have come under the control of Orban’s inner circle and adopted a pro-government stance.

“The European Commission said it was concerned about the suspension of publication of Népszabadság, said Ricardo Gutiérrez. That’s not enough! Following the Charter of Fundamental Rights of the European Union and following the European Convention on Human Rights, states have the positive obligation to guarantee effective media pluralism. The Commission shall require Hungary to comply with its commitments”.

Our GS in solidarity with Hungarian daily #Nepszabadsag
"The EU Commission expressed its concern. It's not enough!" pic.twitter.com/RGSRzscGrU

Last week, the EU liberal leader Guy Verhofstadt tweeted: “With its current policies, Hungary would not have been allowed to join EU in 2004. This has to stop.”

With its current policies, #Hungary would not have been allowed to join EU in 2004. This has to stop. #Nepszabadsag https://t.co/15uyhHiuRw

In April, the Hungarian government signed the Council of Europe Recommendation on the protection of journalism and safety of journalists. The recommendation specifies that “States have a positive obligation to guarantee pluralism in the media sector, which entails ensuring that a diversity of voices, including critical ones, can be heard.”