Turkey: 90 journalists in jail – have your say! 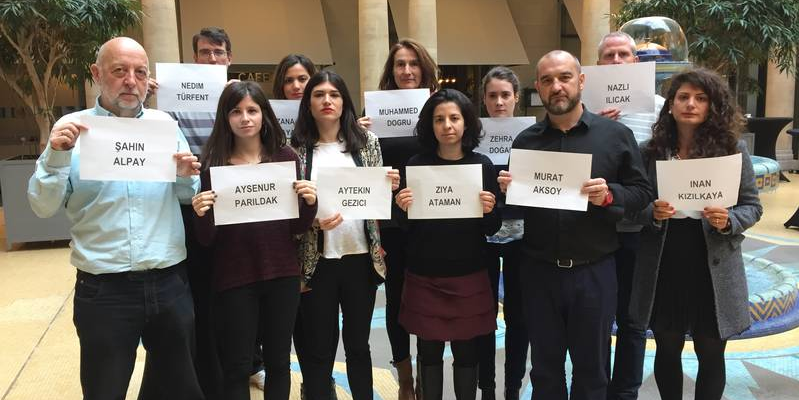 The action is part of the IFJ and EFJ campaign Set journalism free in Turkey that both federations have been running together since 2010. It consists of a one-day show of solidarity action where free journalists can sponsor jailed journalists in Turkey on social media. The action includes an online petition calling on the Turkish government to immediately release jailed journalists and re-establish the signal of all broadcasters.

Turkey experienced a bloody coup attempt on July 15 killing more than 250 people and targeting basic democratic institutions. EFJ and IFJ unreservedly condemn the coup and the use of force against citizens, journalists and media companies.

The failed coup has been followed by a state of emergency and excessive and indiscriminate measures to purge all individuals believed to be connected to the attempt. The Turkish authorities are now jailing journalists, shutting down radio and TV channels and censoring the internet in an attempt to silence criticism. 90 journalists are in jail and more than 130 media have been banned since mid-July. 2,500 journalists have lost their jobs and arrest warrants have been issued for dozens of media workers. Some families of journalists, who are in hiding or have fled, have been arrested to force them to surrender.

IFJ General Secretary Anthony Bellanger said: “The action we launched today is about solidarity amongst journalists worldwide. Journalists in Turkey must be able to tell the truth and work freely. The global journalism community is outraged at the way press freedom has been tarnished in the country. We want to send a clear message to our colleagues jailed in Turkey that we stand by their side. President Erdogan must take all the necessary steps to allow journalists to report without threat, harassment or fear of being sent to jail”.