Enforcing labour rights and improving working conditions for journalists remain challenging in South East Europe and Turkey, as concluded in the Labour Rights Expert Group meeting of the European Federation of Journalists (EFJ) on 26 October in Zagreb.

The meeting is partly funded by the UNESCO as part of the project “Building trust in the media in South East Europe and Turkey” that enables labour rights experts from the region to exchange views with their colleagues.

Erisa Zykaj, journalist and representative from the Association of Professional Journalists of Albania (APJA) said that the enforcement of labour rights is yet to be improved. Although, the APJA successfully lobbied for changes in the labour code that obliges employers to issue an employment contract and provides the possibility for collective agreements, media organisations widely ignore the rights of journalists and it is a common practice for journalists working without a contract.

Zykaj said, “This is why I see it is important to be part of the EFJ expert group and this project to put pressure on the employers in order to improve the working condition of journalists in Albania.” 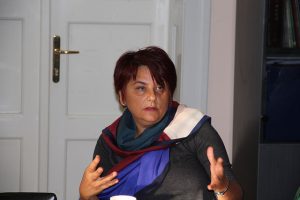 Tamara Causidis, President of the Trade Union of Macedonia Journalists and Media Workers (SSNM) said, “The respect of labour rights is the basic conditions to allow free press and ethical journalism to flourish. Unfortunately, journalists in Macedonia often fear of what they say and do because it will mean losing their jobs. Thus, self-censorship is a major problem.”

Despite this, the union successfully negotiated some collective agreements for journalists to enforce their rights. The union also brought several labour rights violations to court and won the cases.

“This is why we need strong unions to defend journalists’ rights and support from the EFJ and UNESCO,” said Causidis.

Serbia follows the same trend as in Macedonia but the situation is worse. “Anyone organises a union can be fired,” said Dejan Gligorijevic Journalists’ Union of Serbia (SINOS), “Social dialogue does not exist at all.”

Other experts from Germany, Italy and Spain recognised the difficulties facing journalists from South East Europe and Turkey and agreed that more support and monitoring need to be provided to these colleagues.

As part of the UNESCO project, a training for trainer project will be organised in Albania on in December to focus on the issue of labour rights enforcement and collective bargaining.

Tom Law, of the Ethical Journalism Network (EJN) attended the meeting and share with participants the media audit tool developed by EJN to encourage media companies to develop labour friendly policy and working conditions. Participants welcomed the tools and will adapt it for their own use.