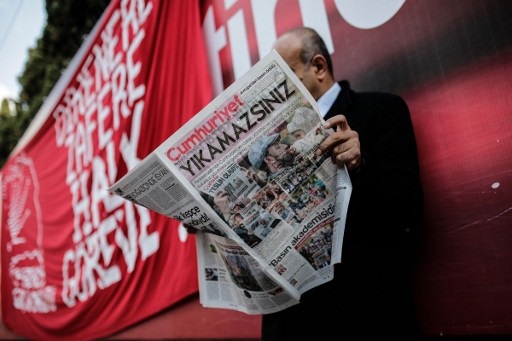 
Today, the European and International Federations of Journalists (EFJ and IFJ) joined a coalition of international media freedom organisations led by the International Press Institute (IPI), in condemning the closure of 15 pro-Kurdish media outlets and the arrests of Cumhuriyet journalists in a joint letter to Turkish officials.

The letter can also be downloaded as a PDF in English.

The letter is shared in full below:

The undersigned members of an international coalition of leading press freedom and freedom of expression groups request an urgent meeting with you following Monday’s operation against the newspaper Cumhuriyet and Saturday’s closure of 15 pro-Kurdish media outlets.

Police on Monday arrested and raided the homes of at least a dozen journalists working for Cumhuriyet. Among those arrested were Editor-in-Chief Murat Sabuncu and columnist Kadri Gürsel. Mr. Gürsel is also a member of the Executive Board of the International Press Institute (IPI) and IPI’s official representative in Turkey.

We are deeply disturbed by this move against not only a highly respected newspaper that remains one of Turkey’s last sources of critical news and information but also a representative of a major international human rights organisation. We are also extremely concerned that those detained are being held without access to legal counsel and without a clear indictment against them.

The closure of 15 pro-Kurdish media outlets, primarily covering the South East of the country, is part of an ongoing campaign to censor the Kurdish minority. It also represents a further attempt by the Turkish government to control all media coverage of the ongoing anti-terror operations in this region, and prevent independent media from investigating grave human rights abuses occurring there.

We condemn these arrests and closures as an extraordinary attack on press freedom, freedom of expression and the journalistic profession – unfortunately merely the latest example of such in Turkey. Our organisations stand in solidarity with Mr. Sabuncu, Mr. Gürsel and their colleagues, as do journalists around the world.

Prosecutors have said that Mr. Sabuncu, Mr. Gürsel and their colleagues are suspected of criminal collaboration with the outlawed Gülenist movement and the PKK. While we understand the need to take appropriate action against those responsible for July’s failed coup attempt, the arrests of Cumhuriyet staff and the sweeping closures of Kurdish media make it clear that Turkey’s current state of emergency is being abused to indiscriminately target any and all who criticise the government.

Indeed, during the first three months of the state of emergency, the Turkish authorities have closed approximately 165 media outlets. Nearly 100 journalists and writers have been arrested and at least 140 journalists are currently in detention, many of whom have no apparent connection to either the Gülenist movement or the PKK.

We would welcome the opportunity to bring our concerns to you directly.

In the meantime, this coalition calls for the immediate release of Murat Sabuncu, Kadri Gürsel, their colleagues at Cumhuriyet and all other journalists jailed for exercising their right to freedom of expression. We also call on lawmakers in Turkey to end the abuse of emergency powers that are being used to suppress legitimate dissent, further crackdown on independent media and undermine what is left of the rule of law.

Thank you for your attention to this urgent matter.

Foreign embassies and consulates in Ankara and Istanbul