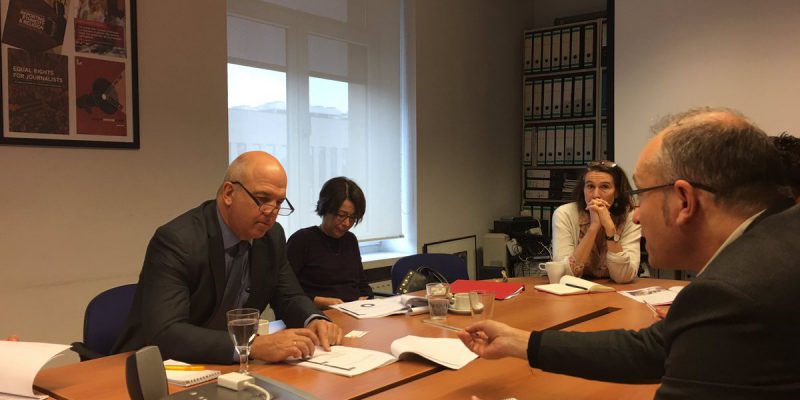 
The European Federation of Journalists (EFJ) held a meeting on 9 November with the Council of Europe’s Commissioner for Human Rights Nils Muižnieks and his team at the EFJ headquarters in Brussels. The two teams discussed current threats to media freedoms in Europe especially the situation in Turkey and abuses of defamation laws against journalists in EU countries.

EFJ General Secretary Ricardo Gutiérrez presented the main challenges and projects the EFJ is currently working on, namely the independence and the strengthening of public service broadcasting in Eastern Europe and the Balkans, the oppressive emergency situation in Turkey and the increase of self-censorship and hate speech in the media.

On public service media, the EFJ highlighted recent cases in Poland, Hungary and Croatian where public service media are gradually politicised. The Commissioner agreed that the situation in those countries are concerning and requires more attention from European institutions to help national governments to address it. The meeting also highlighted the worrying trend by national governments to use defamation laws in some European countries to censor journalists and stifle media freedom.

“I take note of your concerns and I will continue to follow very closely the media freedom situation in Europe during the remaining months of my mandate to help national governments to respect their commitments” said Commissioner Muižnieks.