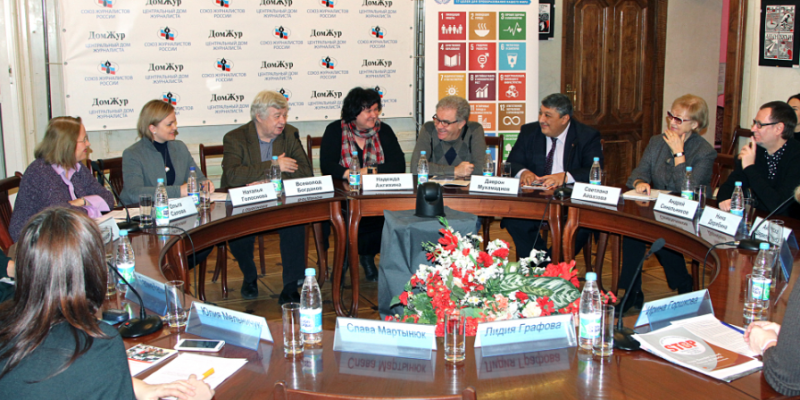 
On November 28, the Russian Union of Journalists (RUJ), together with the United Nations agencies in Russia and the Centre for gender and media studies of Moscow State University, organised a round table focused on “Russian journalists in UN: Combating gender-based violence”. This event took place in the Moscow Journalist Club and gathered experts, journalists and human rights activists. It followed the International Federation of Journalists action to mark UN Day for the Elimination of Violence Against Women and Girls on 25 November.

Nadezda Azhgikhina, vice-president of the European Federation of Journalists (EFJ) and member of the IFJ Gender council, presented a brief overview of the RUJ activities in combating gender-based discrimination in media. RUJ president Vsevolod Bogdanov highlighted the necessity to overcome discrimination and to involve more and more women in the development of free media in Russia. Journalists and gender scholars, as well as human rights activists, discussed current actions to prevent gender-based violence. The event also showcased new movies on domestic violence produced by young Russian directors.

The European Federation of Journalists will be further working on gender equality as a partner of a new project funded by the European Commission (DG Justice and Consumers) aimed at tackling gender stereotypes and promoting gender equality. Advancing gender equality in media industries (EURO-AGEMI) will focus on the next generation of media professionals who have not yet been affected by the gendered media workplace. It comprises educational components as well as knowledge-sharing among journalists students, media professional and academics. It will put together a resource bank of best practices for media industries to use to strengthen gender equality, an online educational module, training sessions and internships in media organisations.