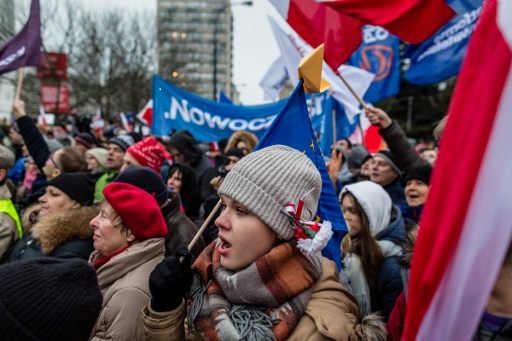 
The European Federation of Journalists (EFJ) has today strongly condemned the latest attack on media freedom by Poland’s ruling Law and Justice party (PiS) to restrict media access parliament. Several thousand people have protested on Friday, Saturday and Sunday in Warsaw over the government’s plans to impose restrictions on media coverage of parliament.

In September,  EFJ affiliate in Poland,  the Polish Journalists Association (SDP) has issued an appeal calling the Speakers of Sejm and Senate to not implement the restrictions for media in Polish parliament. The appeal had been signed by journalists representing the entire media spectrum. Earlier this year the CMWP (SDP’s Press Freedom Monitoring Centre) has organized a conference on the issue followed by opinions sent to the authorities of both chambers of parliament. The decisions taken by parliament’s authorities have not taken into account the opinion of journalists community.

The SDP announced its readyness to take part in any mediations and negotiations leading to such a regulations of media presence in parliament, that will respect the media and citizens’ rights to information.

According to a document available on the Sejm website, 300 permanent and 200 temporary media accreditations have been issued in 2016. During the sessions of Sejm up to 300 daily passes are granted.

On Saturday, journalists held a meeting with the speaker of the upper house of parliament to discuss the new rules. Another meeting is scheduled for Monday.

Polish President Andrzej Duda has offered to mediate. He held meetings with opposition party leaders who said they had demanded the proposed press restrictions be dropped.

Poland’s human rights ombudsman Adam Bodnar reminded that access to the parliament is granted by the country’s constitution. He told the news channel TVN24 that “The role of journalists is not only to follow computer screens, but also to seize the opportunity to talk to politicians and to do real-time checks of what’s going on”.

“The media plays an important role in monitoring the work of the MPs,” said EFJ president, Mogens Blicher Bjerregård, “Journalists should be provided with enhanced access to MPs and facilities ensuring they can move freely within the parliament. I fully agree with the statement signed by Poland’s largest independent news outlets on Friday. Such a restriction not only limit the freedom of journalists, but also the rights of citizens to be fully informed about the activities of their parliamentarians.”