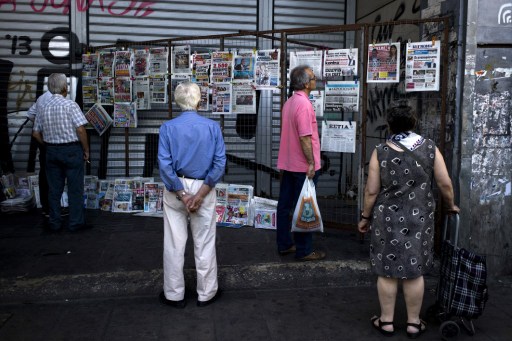 
The International and European Federations of Journalists (IFJ and EFJ) have strongly backed calls by Greek journalists to prevent banks forcing the closure of the country’s oldest newspapers and threatening up to 500 jobs.

The IFJ and EFJ have backed demands from their Greek affiliate, the Journalists’ Union of Athens Daily Newspapers (JUADN), to stop the banks foreclosing on the Lambriakis Press Group (DOL) loans.

The group, which owns the oldest national newspapers To Vima and Ta Nea, is facing serious trouble after the banks threatened to call in their loans.

Over 500 media workers, including 250 journalists, most of whom are JUADN members, have not being paid for 5 months and are now facing unemployment.

JUADN has denounced the particularly harsh working environment, job layoffs, salary cuts and lengthy delays in paying overdue wages within the group’s media houses, including the private radio Vima FM, the news site in.gr and the digital editions of To Vima and Ta Nea newspapers.

DOL is also an important shareholder of MEGA TV, one of the major television stations in Greece, which would also be affected by the group’s shut down. The publishing group PEGASUS, another of MEGA TV’s shareholders, faces similar financial problems affecting its companies, the historic national newspaper Ethnos, financial newspaper Hmerisia and sports newspaper Goal News.

JUADN claims the situation is not only threatening the journalists’ rights but also the whole society and democracy as citizens are losing more and more diverse sources to be properly informed.

“Besides devastating consequences for journalists and their families due to the two major press group’s dire financial situation, if newspapers are to cease publication and other media halt their operations, a void in public information will be created having a disastrous effect on pluralism and media freedom in our country,” said JUADN in a statement.

The IFJ and EFJ have expressed their solidarity with the union and concern at the devastating situation concerning media freedom in Greece.

“We are extremely worried that media pluralism, which is a pillar for any democratic society, is being swiftly dismantled in Greece,” said IFJ President Philippe Leruth. “We have seen an auction for four private TV licenses favouring media concentration as well as several attacks from the authorities on the social security and welfare protection for journalists and media workers. Journalism is a public good and should not be considered as a luxury. Especially in difficult times, media houses should be allowed to keep an eye on every power having a direct impact on citizens.”

“The EU Media Pluralism Monitor has shown that media pluralism in Greece is mostly threatened by the high concentration of media power and the underlying interdependence between political, economic and media elites,” added EFJ President Mogens Blicher Bjerregård. “The public authorities in Greece must do the utmost to avoid the closure of To Vima and Ta Nea.”