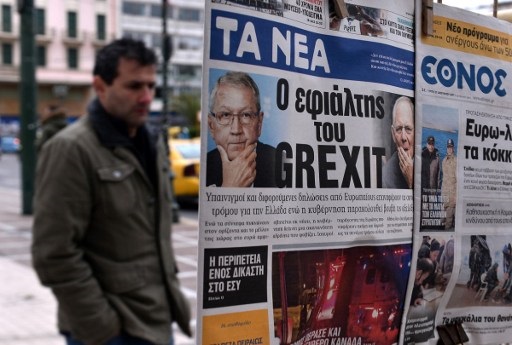 
The two oldest newspapers in Greece, To Vima and Ta Nea, were among the publications which were supposed to cease publication last weekend. On Saturday , the media group which owns them, Lambrakis Press Group (DOL), announced the end of their publications “within days due to financial reasons.” The International and European Federation of Journalists (IFJ and EFJ), together with their Greek affiliates, are asking for time to negotiate a long term solution.

As a result, over 500 media workers, including 250 journalists, most of whom are members of the IFJ/EFJ Greek affiliate JUADN (Journalists’ Union of Athens Daily Newspapers), are facing unemployment. The union also denounced the fact that all DOL employees have not been paid for the last 6 months and have suffered a particularly harsh working environment.

Despite the announcement of ceasing publication, the group’s workers have decided to resist and went on working on Monday and Tuesday with no guarantee of payment.

The collapse of Greece’s most powerful media group is a cause for concern and the IFJ/EFJ together with their affiliates have renewed their call for media pluralism in the country, cornerstone of any so called democratic society, to ensure diversity of sources of information so that Greek citizens can be properly informed.

“The government and the opposition bear huge responsibility over these developments,” said JUADN Executive Board in a statement. “Political parties must make clear where they stand and give a clear answer, mostly to DOL workers facing such precariousness. Stravos Psycharis has also an obligation towards DOL workers and readers, since it is them who up to now kept DOL going, in particular colleagues who insist on keeping open To Vima and Ta Nea, by financing their operation. At this point, justice comes into the picture.”

The IFJ/EFJ echo the unions’ demand, calling on all parties involved to do their utmost in order to find a solution and save the publications.

“We call on all parties involved to pursue as a priority all options for a negotiated long term solution in the interests of workers,” said IFJ President, Philippe Leruth. “In the meanwhile, we urge for respect of the editorial independence of journalist who continue to work on the content and reporting.”

“Losing these baselines newspapers from the Greek media landscape would be a terrible loss, both for the society and for all the families involved in their operating who face the worst of the uncertainties,” added EFJ President, Mogens Blicher Bjerregård.

Both Federations have joined the Council of Europe Commissioner for Human Rights, Nils Muižnieks, in urging the Greek government and private companies to give due consideration to the impact of business enterprises on human rights and to respect the socio-economic rights of these papers’ employees.