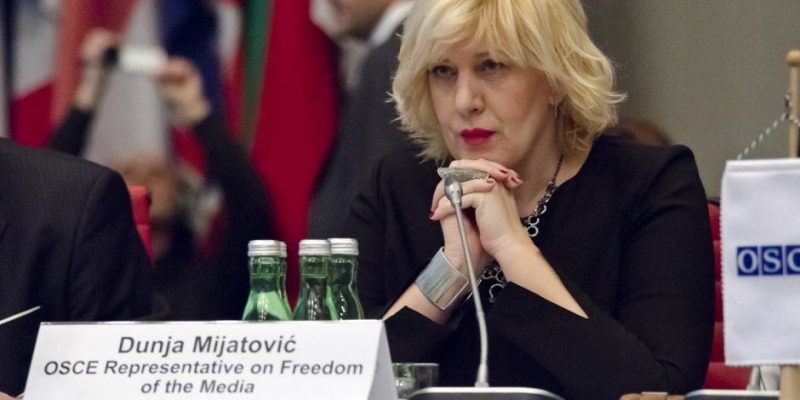 
The Representative on Freedom of the Media, an independent OSCE Institution, has a unique mandate to protect and promote media freedom in all 57 OSCE participating States. The current mandate holder, Dunja Mijatović of Bosnia and Herzegovina, is due to leave the Office on 10th March 2017. To date, there has been no announcement of her successor. The International and European Federations of Journalists (IFJ and EFJ), together with a wide coalition of freedom of expression organisations (including AEJ, Article 19, CPJ, Index on Censorship, IPI and RSF/RWB), sent today a letter to OSCE Participating states, urging them to press on the OSCE to select and appoint without delay the new Representative, and by doing so, ensure the best profile possible with a track record of independence and proved commitment to freedom of expression and freedom of the press.

Here is our letter to the members of the Permanent Council of the Organization for Security and Co-operation in Europe (OSCE):

We, the undersigned, major journalists’ and freedom of expression organisations, are writing to urge the Permanent Council of the Organization for Security and Co-operation in Europe to ensure continuity of the Office of OSCE Representative on Freedom of the Media at the end of Ms Dunja Mijatović’s tenure.

“The OSCE Representative on Freedom of the Media has an early warning function and provides rapid response to serious non-compliance with regard to free media and freedom of expression. The OSCE participating States consider freedom of expression a fundamental and internationally recognized human right and a basic component of a democratic society. Free media is essential to a free and open society and accountable governments. The Representative is mandated to observe media developments in the participating States and to advocate and promote full compliance with the Organization’s principles and commitments in respect of freedom of expression and free media.”

Since its inception in 1998, the Office has had a mandate holder without interruption, and successive Representatives on Freedom of the Media have helped to maintain freedom of media on the policy agenda within the OSCE and made a considerable contribution to a number of initiatives related to press freedom in the OSCE region. This was made possible by both the independence conferred on the Office and the profile of the Representatives who have shown determination, vision and steadfastness in fulfilling their mandate.

We understand that the current mandate holder, Ms Dunja Mijatović, is due to leave Office in a month’s time after serving a one year extension of her two three-year terms. And yet, to date, there has been no announcement of her successor just weeks before the position becomes vacant.

This situation is of great concern to media and other stakeholders, including many organisations actively concerned for media freedom in Europe who fear losing a valuable partner and voice. The work of the Representative on Freedom of the Media is more important than ever before, with journalists facing unprecedented pressures on the continent and across the OSCE area as a whole.

We wish therefore to warn against the risk of rolling back the progress achieved in protecting media freedoms, undermining advances into promoting stable, tolerant and accountable societies.

That is why we urge all Participating States to press on the OSCE the need to appoint a new Representative on Freedom of the Media without delay and to ensure the Office’s achievements over the last two decades are not lost.

We also encourage the Participating States to use their collective weight to influence the choice of the new Representative, and by doing so, ensure the best profile possible with a track record of independence and proved commitment to freedom of expression and freedom of the press for this important position.