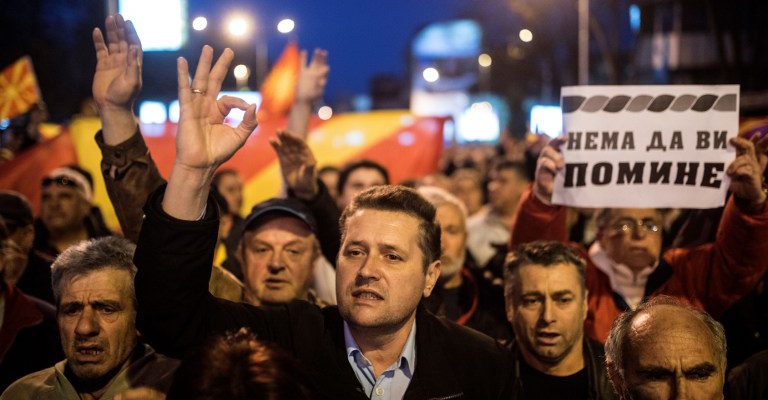 
UPDATE (14.03.2017): Another attack against journalists happened on March 11 in Skopje. TV 24 crew was at first verbally abused and then one of their journalists Hristijan Banevski was hit in the head with a stick, during the protest “For a Unified Macedonia”.

UPDATE (06.03.2017): Two more attacks against journalists took place in Macedonia after the TV crew was beaten during the protest. On March 1 Branko Trickovski was verbally abused by two young men near his home. The retired journalist is famous for his criticism of VMRO-DPMNE party. One of the attackers shouted at Trickovski and called him a traitor, while the other recorded the incident. On the same day another famous journalist Borjan Jovanovski was verbally attacked in a restaurant, when a young man called him a traitor and spat at him.

The European Federation of Journalists backs its Macedonian affiliate, the Association of Journalists of Macedonia (AJM) in condemning recent attack against journalists during the demonstration. The reporter and cameraman of news website A1 On Alexander Todevski and Vladimir Zhelchevski were beaten by five participants of the protest organised by the civil initiative “For mutual Macedonia” on February 28, in Skopje. Both were hospitalized and realised earlier today.

The AJM calls for solidarity and urges journalists not to take risk in covering tonight’s protest of the initiative “For, Macedonia”, stating that the future position regarding such events would depend on the readiness of organisers and the Ministry of Interior to provide safe working conditions for journalists. The AJM explained:

Currently there are protests in Skopje and other cities against the deal between the Social democrats and the Albanian Democratic Union to make Albanian the second official language in the country.