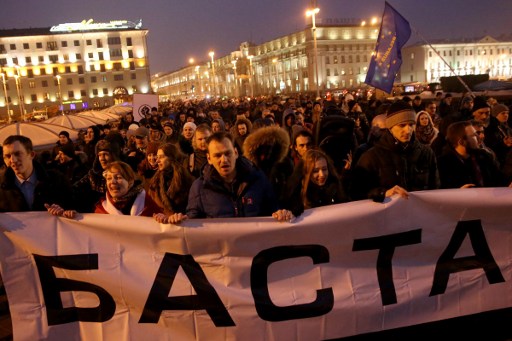 
UPDATE (24.03.2017):  Hanna Dus’ and Viktar Kachan were detained yesterday in Babruysk, when they tried to report on a trial, the journalists were taken to the prosecutor’s office for a talk and later released. Sviatlana Tsishko, the editor of the website Kraj.by, was fined for approximately €200 for publishing a story about a protest on the grounds that the article can be interpreted as an invitation to the unsanctioned event.

UPDATE (23.03.2017):  Two more journalists Liubou Luniova and Volha Davydava were detained yesterday in Minsk, while reporting from the police department on the detention of a political activist. They were released in an hour. The number of detainees raised to 33 in the last three weeks.

The crackdown on the media in Belarus grew further today as journalists Kastus Zhukouski and Andrey Tolchyn were detained in Dobrush while a freelance reporter working for Belsat Viktar Yarashuk was detained in Pinsk. They have all been released by the police after the verification of their documents although Yarashuk was fined.

At least 9 other journalists were detained across the country on 18 March according to the BAJ:

• In Kobryn, journalists Ales Liauchuk and Milana Kharytonava were detained after covering a protest in the town. According to the journalists, they were beaten, threatened and detained for more than three hours for “illegal production and distribution of media”. The police seized their equipment until the court hearing.

• In Barysau, journalists Volha Chaychyts and Siarhei Kavaliou were detained after the TV crew came to cover a planned protest in the city center. The journalists weren’t informed of the reason for the detentions.

• Journalists Siarhei Rusetski, Uladzimir Luniou and Alena Stsiapanava were detained twice on the same day: first on the way from Navapolatsk to Vitebsk, where the police accused them of violating traffic rules, and later in Polatsk, where the police decided to investigate whether the group illegally changed the number plate on their car.

• Independent journalist Larysa Shchyrakova was detained under suspicion of alleged theft, when she was heading to Mazyr. Police thought that the journalist looked similar to the description of a suspect.

• Independent journalist Kastus Zhukouski, who was also heading to Mazyr, was stopped by the traffic police.

The IFJ and EFJ condemned the detention of 18 more journalists back on 12 March while covering massive protests against the unemployment tax, also known as the “law against social parasites”, that requires people who work less than 183 days a year to pay the government $250 annually, media reported. 2 of them were sentenced to 15 days in jail, 3 were fined and 5 are awaiting trial, according to a BAJ appeal to the UN Human Rights Commissioner’s Special Rapporteur on the promotion of the right to freedom of opinion and expression.

On March 10, BelaPAN correspondent Siarhey Karalevich was also detained by the police after covering a demonstration against the same new tax.

Following this first wave of detentions, the BAJ sent a petition to the Minister of Internal Affairs and General Prosecutor on 17 March condemning them and demanding a fair investigation.

In the petition, the BAJ reminded that a journalist has the right to attend mass events, any events of public significance, and distribute information from there.

The IFJ and the EFJ backed their affiliate recalling that holding a journalist liable for conscientious work is inadmissible.

“We draw attention to the fact that violating journalists’ rights is not only an unlawful restriction of freedom of information but also violates constitutional rights of all citizens to express their opinion, receive and distribute information,” said IFJ General Secretary, Anthony Bellanger. “We monitor with our highest concerns the media crackdown taking place in Belarus and urge the authorities to stop harassing our colleagues and to drop all the charges against them as a matter of urgency.”

The Norwegian Union of Journalists condemned the detention of journalists in Belarus and encourage other journalist organisations to support Belarusian colleagues. In the statement, they wrote:

“We demand that all journalists in Belarus, both staff journalists and freelancers, are allowed to practice their profession and report.”