Mass detentions of journalists in Belarus 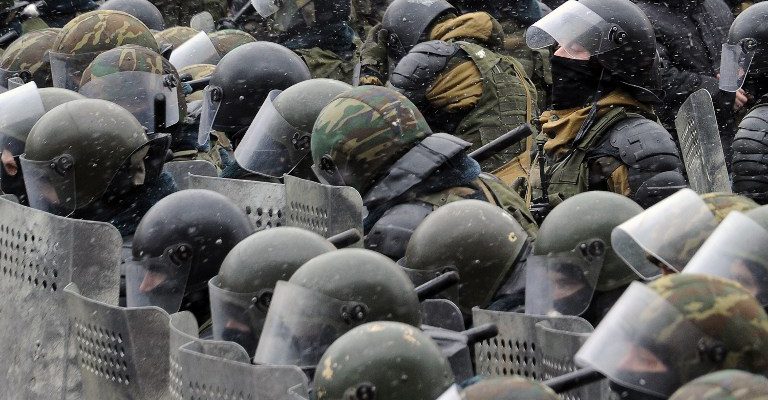 
Update (28.03.2017): Aliaksandr Barazenka, Belsat cameraman, who was sentenced to 15 days in jail yesterday, announced a hunger strike. On March 25 he was detained by the police, while covering the protests in Minsk. Despite repeating several times during the detention that he is a journalist, he was charged with “minor hooliganism”.

More journalists were prosecuted in Belarus today: Dzianis Ivashyn was sentenced to 5 days in jail, Kanstantsin Mardzvintsau to 15 days in jail, Syarjuk Kijko to 12 days in jail and Viktar Stukau was fined.

In Belarus, since Friday March 24, 2017 the law enforcement agencies detained 55 (totally around 90 journalists) more journalists for covering massive protests against the unemployment tax. The controversial legislation, called “law against social parasites” that requires people who work less than 183 days a year to pay the government $250 annually, triggered a massive protest in the country. Some journalists covering these protests have been beaten and detained by local authorities. While the majority was released the same day, some of the journalists were sentenced to 5-15 days in jail on the grounds of “hooliganism” (waving hands and swearing).

The timeline of events is:

Today the journalists were awaiting the trials across the country. Hearing against Aliaksandr Barazenka, journalist of TV channel “Belsat”, started today in Minsk. He was accused of disruptive behavior, despite his arguments that he was just reporting on the protests. Despite the video of the detention, which showed that the journalist wasn’t swearing and just said that he was a journalist, when the police approached him, Barazenka was sentenced to 15 days in jail.

Another court hearing against Dzianis Ivashyn started today, the defense found out that the protocol in the case is different from the copy of the protocol that Ivashyn has. His lawyer believes that the evidence were falsified.

Marina Kastylyanchanka faced a trial today in Minsk. On March 25 the police searched her house, she was accused of breaching article 23.4 of the Code of Administrative Violations (disobeying the police). Kastylyanchanka was sentenced to 15 days in jail.

Hearing against blogger Raman Pratasevich started today in Minsk, he was accused of disruptive behavior. The judge refused to watch the video, which could show evidence that the journalist wasn’t swearing or waving his hands. Pratasevich was sentenced to 10 days in jail.

Kanstantsin Mardzvintsau and Leanid Svetsik had their trial in Vitebsk today. They were accused of breaching the article 23.34 of the Code of Administrative Violations (participating in an unauthorized actions). Svetsik was sentenced to 15 days in jail.

Another hearing took place in Vitebsk today against radio journalist Artem Sizintsavym. He was sentenced to 10 days in jail.

The updated list of detained journalists can be found on the website of Belarusian Association of Journalists (English version).