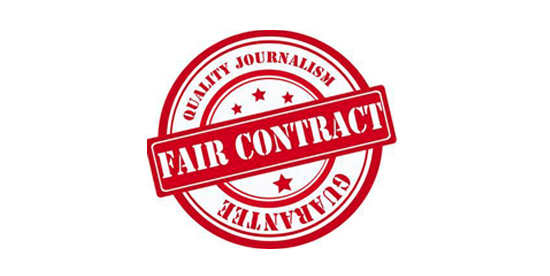 
Better contracts, more transparency in payments and a fair share of remuneration for journalists: these are on top of the agenda for the European Federation of Journalists (EFJ) in the latest consultation on the EU copyright directive. The EFJ is putting forward important amendments to the proposed new rights for internet publishers.

“We have heard many speeches in which EU Commissioners and Members of the European Parliament have emphasised the need for pluralistic European content online. They have acknowledged that achieving this means that the value gap between authors and those who profit from their work must be closed,” says EFJ president Mogens Blicher Bjerregård, urging the EU to make the necessary changes to the proposed EU copyright directive.

The EFJ’s amendments to this and to the draft report for the  Legal Committee of the Parliament (JURI) cover three main topics.

Mogens Blicher Bjerregård explains that the EFJ agree with the publishers that we must find mechanisms by which media as well as intermediaries and aggregators such as Google and Facebook must pay for the content that they profiting from: “This is a challenge that the EU should be able to solve in the proposed directive, but it is not solved by giving the publishers a new sole right, although I fully understand, that our publishers need a solution. Therefore, we propose amendments to article 11 of the Draft Directive, which sets out the publishers’ rights.

“It is time for publishers and authors to work together to find the right solution. We propose that publishers’ rights should be exercised through collective management organisations with both authors and publishers on their boards, to ensure fair remuneration for authors”.

In a letter to the EU on the proposed Copyright Directive proposal the EFJ and International Federation of Journalists once more emphasise the need to strengthen  Articles 14, 15 and 16, which attempt to improve the contractual situation for authors, who are and will remain the weakest party in negotiation on contracts. To achieve the goal of sustaining high-quality European content requires more transparency in accounting and better tools for journalists, not least the full right to be represented by their trade union. The EFJ is working very closely with other authors’ organisations on this topic.

Finally, the EFJ supports the amendments put forward by the International Federation of Reproduction Rights Organisations (IFRRO) that give precedence to licensing in order to ensure journalists receive remuneration for the use of their work in the education sector. If EU member states are allowed to grant exceptions to authors’ rights that allow educational institutions to use journalists’ and others’ work without payment, they will undercut the production of the new works that are, after all, education’s primary “raw material” as well as weakening authors’ “moral rights” – their ability to defend the identification and integrity of their work – add Mogens Blicher Bjerregård.