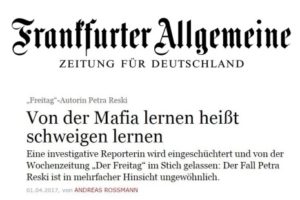 
Petra Reski, female journalist and author of several books, recently published as freelancer for Freitag magazine some articles on the relations of an Italian businessman operating in Germany. The businessman accused of being member of the Italian maffia launched lawsuits against the journalist who did not received support from Freitag magazine based on the argument that “redaction are not legal protection insurance against inadequate research work”. The freelancer felt let down by “Freitag” magazine.

The German union Verdi couldn’t support her financially for technical reasons as to receive legal support from the union, a journalist is asked to contact the union first.

Subsequently, the journalist launched a crowd-funding campaign to get some financial support to cover legal fees and also got the help of the European Center for Press and Media Freedom (ECPMF) which has shown interest for this case.

The European Federation of Journalists (EFJ) is also following her case and decided to file an alert on Mapping Media Freedom platform as this “type of judicial harassment may have a chilling effect on all freelance journalists and will discourage them from further reporting cases of public interest”, said the EFJ.