Macedonia: two journalists injured during storming of the Parliament 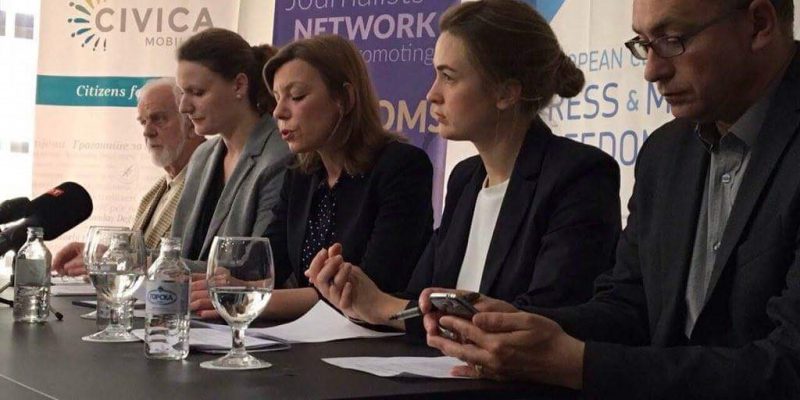 
During a press conference today in Skopje (Macedonia), the European Centre for Press and Media Freedom (ECPMF), the European Federation of Journalists (EFJ), South East Europe Media Organisation (SEEMO) and Osservatorio Balcani e Caucaso Transeuropa (OBCT) called on the Macedonian authorities to investigate the attacks against 10 journalists and media workers, during last night’s storming of the Macedonian parliament building by nationalist demonstrators. At least two journalists were injured in the attack, according to reports from the Association of Journalists of Macedonia (ZNM).

Dimitar Tanurov, a reporter for the independent online news agency Meta, was taking pictures inside the parliament. He was sudenly beaten and kicked by a group of protesters, calling him a traitor when they saw his press card. He suffered multiple head and face injuries.

Nikola Ordevski, a cameraman with the independent news agency Makfax, was also attacked during the storming. He has been treated in hospital for a concussion.

At least eight other Macedonian journalists covering the events were kicked or intimidated by protesters, but they were not seriously hurt, according to ZNM reports.

“We met yesterday with the Macedonian minister of Interior Agim Nuhiu. We asked him to protect journalists facing rising violence fueled by politicians. Now we call on the minister and prosecutors to conduct swift investigations on yesterday’s attacks. We will follow closely every single case with the support of our Macedonian affiliates, the journalists’ association ZNM and the journalists’ trade union SSNM,” said Ricardo Gutiérrez, General secretary of the EFJ, during the press conference.

The members of the ECPMF-EFJ-SEEMO-OBCT fact-finding mission to Skopje issued this morning a global statement calling on Macedonia to stop violence against journalists.

It is high time to stop violence against journos – #Macedonia #ECPMF https://t.co/3UMRtnOMyQ