Pristina media days and protest for media freedom in Kosovo 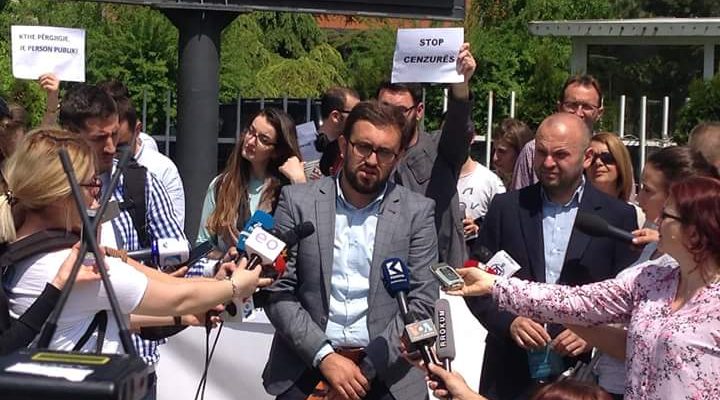 
The EFJ was invited to the Prishtina media days organised by the University of Prishtina in cooperation with the University of Vienna and the South East Europe Media Organisation (SEEMO) on 3-5 May. Under the motto of “Truth and wisdom in journalism. Media and social change”, experts on media and journalism discussed with a large group of  students of journalism the main challenges ahead of us: relationship between journalists and audience; role of media in societies of transition including the public service media and its specific challenges when it comes to financial sustainability and political independence. They also discussed how to cover minorities, how to cover the past, how to cover migration; how to bridge between dividing lines; how to distinguish activists from journalists, social media from “traditional and digital media”; global narratives versus local narratives and of course media literacy. 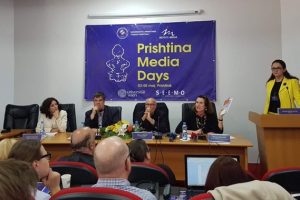 EFJ Director Renate Schroeder gave the key note speech on World Press Freedom Day outlining major challenges Europe’s journalists are in today, including increased self-censorship as well as unprecedented attacks against journalists and an unacceptable level of precarious work among journalist, in particular in the Western Balkan. The issue of attacks against freedom of association against both human rights groups and trade unions was another trend she depicted as a serious threat on democracy in Europe. She congratulated the Association of Journalists of Kosovo and other civil society groups for its concerted and successful efforts against the latest coup of the government to reintroduce defamation, which had been decriminalised in 2012 (see EFJ PR). Due to such pressure, the government withdrew this draft law.

Shkelqim Hysenaj, the President of  the Association of Journalists of Kosovo (AJK), EFJ affiliate, said that the key problem in Kosovo is the complete lack of regulation in Kosovo’s ever larger online media. He said that from January until the end of April 2017, AJK registered seven cases of verbal threats against journalists. 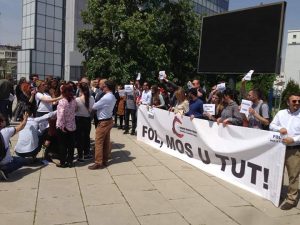 #Folmosutut (Speak Up, Don’t be Afraid) was the motto of the protest aimed at opposing the tendencies to limit the freedom of media and expression in general, especially through recent failed initiative of Kosovo’s Justice Ministry for amendments to Criminal Code. The protest also highlighted other serious concerns such as impunity by justice system towards the cases of physical assaults and life threats against journalists and other media professionals.

The journalists’ community also protested against censorship, demanded for better working conditions and access on time to information by public institutions.

The three day meeting was a success and in the final session the need for dialogue; the need for more bridging gaps and discussions with the young was highlighted by the university professors of Prishtina organising the event.