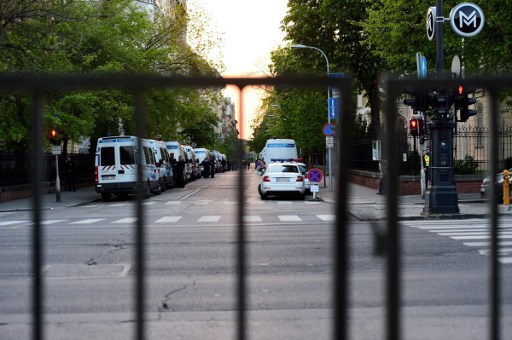 
Júlia Halász, a reporter of the Hungarian liberal 444.hu website, was violently expelled from one of the public party forums in Budapest last Thursday (04/05/2017). National Economy Minister Mihály Varga and National Defence Minister István Simicskó were explaining the dangers of the “Soros network” and the “Stop Brussels” campaign. Halász was reporting on the anti-Soros forums and started producing footage when she was approached by three men who told her to leave, as she could not record the event without registration.

“I went back in the room, but no longer recorded the event with the camera. I just took some photos with my cell phone, as did numerous people around me,” said Halász. Shortly after, she received a phone call and went out into the corridor. She was followed by the organizer, László Szabó, the Fidesz deputy chief of staff in the district, who tried to take her out of the building when she finished her call. “He tore from my hands my cell phone and aggressively demanded me to leave the building. He accused me of having produced a video recording, which I did not do. After he refused to return my phone and began physically pushing me around, I started yelling for help, but he grabbed me by the arm and dragged me down the stairs,” reported Halász.

Upon the arrival of the police, nobody at the Fidesz event was willing to identify the man who had attacked Ms. Halász, whereas the Fidesz politician had meanwhile fled using a back door. When 444.hu contacted the Ministry of Defence to comment on the incident, the Ministry issued a statement saying that it was not involved in the organization of the event and offered no comment, according to the Hungarian Free Press.

Several hundred people then rallied Saturday (06/05/2017) in Budapest outside an office of Hungary’s governing Fidesz party. Participants at the rally shouted slogans in support of press freedom.

The EFJ/IFJ submitted the case to the Council of Europe Platform for the Protection of Journalism.