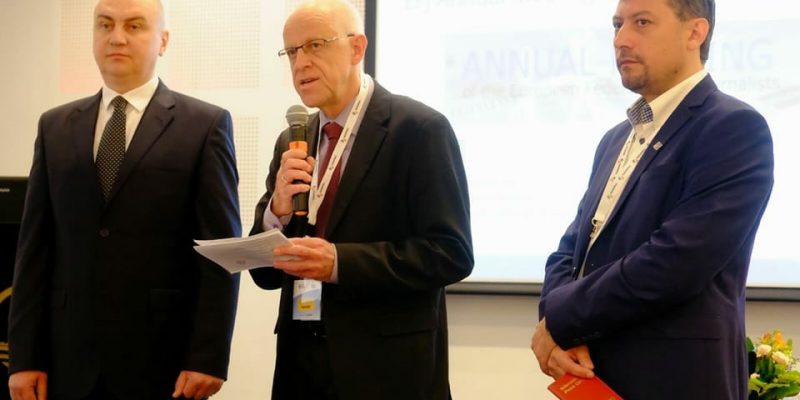 Journalism in Europe is facing critical times. Media and politics are in an increasing conflict across Europe. More than ever, the fundamental pillar of our democracies, credible – high quality – investigative – journalism is crucial for the citizens. Journalism including all media-workers providing content.

Across Europe we have three big challenges:

Three journalists have been killed in Europe since our general meeting in Sarajevo – in Ukraine, Turkey and Russia as targeted or because they were journalists. 160 journalists are in jail in Turkey, Belarus, Russia, Montenegro, Macedonia and Azerbaijan, and 145 of them in the biggest journalist prison in the world, in Turkey.

Media workers receive death threats, some have been beaten up, and in some countries more pressures come from the politicians and authorities. For all these reasons, we have increased our attention regarding safety of journalists. The situation is vulnerable in several corners of Europe and among them Caucasus.

One of the mechanisms to fight a growing uncertainty is the dialogue, that EFJ has supported in the Ukraine-Russia conflict. Under the umbrella of OSCE we have managed to a certain extend to let the dialogue thrive among colleagues across the border.

The EFJ is contributing seriously together with now 9 media NGO submitting alerts to the Platform to promote the protection of journalism and safety of journalists hosted by the Council of Europe. We have now got a tool we should be able to use in finding the mechanisms for better safety.

We are providing our affiliates with news and facts regarding safety and on how to fight impunity: I am very pleased that many of our affiliates in various ways have shown solidarity and in particular with our colleagues from Turkey through statements, by writing letters to ambassadors, to prime ministers and other officials, or by demonstrations.

178 media outlets has been closed down in Turkey since the coup attempt – together with thousands of court cases, hundreds of journalists detained or/and behind bars during the same period, we have seen the most serious attack against press freedom in Europe.

Since 2017, the EFJ and IFJ together with our colleagues from our affiliates in Turkey have been running an EU project “Journalism is not a crime” and we have successfully organized the first trade union leadership training.

To give you a chance to do more, we have created a postcard, where you as delegates today and some of your colleagues at home can write messages in your languages. At our website you can find a list of address where you can post these cards for our colleagues in jail. Such messages will give an extremely important moral support to our colleagues and their relatives in Turkey.

Across Europe, the political understanding of the impact of journalism and the importance of free media for democracy seems to be in decline.

Among examples are the undermining of public service media in Eastern European and not least in the Western Balkans countries both financially and politically. We must keep on reminding our governments about the principle of keeping at arms-length.

In many countries, legislation on surveillance has a huge impact on journalism and to protect sources. We risk more self-censorship.

This is not only theoretical – look at the Lux-leaks case where courageous whistle-blowers where punished regardless of the great importance of the case for our societies. On this topic we cooperate with the Eurocadres, the trade union of professionals and managers lobbying for a directive to protect whistleblowers.

A new survey where the EFJ and its affiliates have been involved is “Journalists under pressure”, published by the Council of Europe on the general situation in Europe shows that we have a rising problem in a number of countries with more pressure on journalistic sources.

Four out of 10 journalists said that they have experienced surveillance during the past three years.

Such an environment is difficult for quality journalism in general and for investigative journalism in particular. For many journalists to survive in their job, many will make a very simple risk assessment and will self-censor their journalism.

In this regard, it is not helpful when an ownership of media is concentrated in huge companies without focus on free and independent journalism. Pluralism is essential for press freedom and our democracies.

Decent working conditions and for too many journalists to make a living out of their job are likewise important for press freedom and pluralism.

Last year being at a working seminar in Serbia, I realized how difficult the situation is in several of the Western Balkan countries, where journalists can wait for months to get their salary regardless that we are talking only about a few hundred euros. Social dialogue is far away.

Regarding Romania it would be highly welcomed if in particular the minister of Culture would launch a discussion with Media Sind – FAIR about the working conditions in the media and the creative sector in Romania. Here in an EU-country there is a dramatic lack of collective agreements in the media sector. Public authorities have the responsibility to open such a discussion. Media Sind – FAIR sent in October a proposal of collective agreement to the minister in order to agree on basic working conditions in the sector. Until now: No reactions.

Across Europe we have an increasing challenge in precarious work, where freelancing is not a free will, but the only way for journalists to get a job.

The EU-commission has just launched improvements of the social pillar which we welcome, though we want them improved and not least regarding atypical workers. Our affiliates report that an increasing number of media-workers are freelancing.

We are working closely with the workers’ unions within the creative industries (artists, musicians, actors …) on this matter as we have common interests. The European Trade Union Confederation does also acknowledge that we have special resources regarding atypical workers. Therefore, in June we will deliver our part of answer on the consultation that the EU has sent out in order to fulfill their obligations regarding the social pillar.

We have a momentum, maybe not for an immediate result but for at making changes in the longer perspective. The labor market changes and a positive sign is that the EU commission has understood that.

We have been working firmly to ensure authors’ rights in the EU copyright directive linked to the digital single market. We are continuing this work in close cooperation with the Authors’ Rights Group, and I will come back to that during the reports from the expert groups.

In the coming year, the European Federation of Journalists (EFJ) together with among other the Council of Europe will put the topic “Media and Politics in Conflict” on the agenda with debates across Europe, a culmination at a high-level conference in Gdansk during the first months of 2018 followed by further actions.

All parties must be a part of the solution – the media workers, the media owners, the politicians the authorities and the public opinions.

Later today the annual meeting shall vote about our finances. At this stage I would just like to draw your attention to the fact that finances and policy are linked very close together. We have in the EFJ a very clear policy about inclusiveness and partnership as all media organizations are dependent on each other.

By entering a large number of partnerships in mutual understandings of our different roles and by working at equal basis, we have managed the highest number of projects ever, and even better to be more broadly recognized as a reliable partner. The figures and results for 2016 give a very clear message on this.

The European Center for Press and Media Freedom in Leipzig is one of our new partners with a growing importance. EU-support for media freedom is transferred during that organization. It is and interesting example as ECPMF is providing legal assistance for journalists, though a limited number, they have a residence program – they also arrange conference with a big network and we cooperate on projects.

Index of Censorship is another Freedom of Expression organization, with which we are engaged and benefit from when monitoring violation of journalists and media. It is most often a win-win to cooperate.

In the coming year, we in the EFJ shall follow-up our policy maintaining the awareness regarding violations against our members, we shall use the momentum to go into European negotiations regarding social dialogue for all workers, continue our lobbying for authors’ rights, bring new ideas to our affiliates, pave the way for new ways of financing independent journalism and continue to cooperate with all relevant stakeholders. We shall make a difference for our affiliates and do our duties internationally where our national organizations can benefit from it.