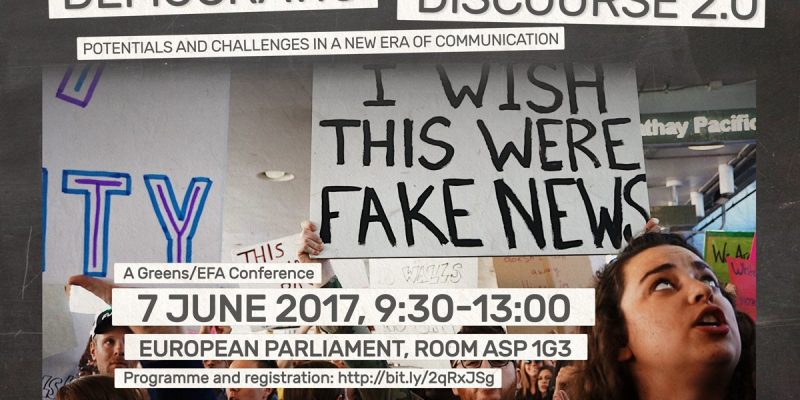 
The future role of media is under question – new online media companies are emerging, print advertising is in decline and there is more and more talk about ‘fake-news’, which contributes to losing readers’ trust. The Greens in the European Parliament organised on Wednesday (07/06/2017) a Democratic Discourse with experts discussing the new trends in the digital news landscape and how journalists and media outlets are living up to them.

“The majority of professional journalism is still funded by newspapers – 69 % of the funds for professional journalism came from newspaper companies in the UK in 2012,” pointed out Rasmus Kleis Nielsen, director of Reuters Institute for the Study of Journalism. Their Digital News Report 2016 showed that 69 % of the people also go to newspaper brands when searching for news online. Among traditional media, television still has a large audience as well, but the viewers are mainly older, added Kleins Nielsen. In his opinion, more worrying problem is that 38 % of people still don’t access news even once in a day, despite the incredible abundance, according to the news report.

Google and Facebook are new media companies, but see themselves only as tech companies @jorisvanhoboken #DemDis

There are significant changes in the business of news, said Kleins Nielsen. “Advertisers are not interested about the news, but about the audience. Consequently, newspapers try to get the users to pay for the news.”

The subscription model is the one that a rather successful Spanish online newspaper eldiario.es has been using. The daily has been around for five years now. “It started as a blog of a one person who wrote about politics, got collaborators, then they set up a company and today it is owned by half of its workers,” explained Marta Peirano, Deputy Director at eldiario.es. “We try to work for our readers – if we lose them, we are not working right,” she added. She stressed the importance of independent journalism, without having to respond to owners or advertisers, especially since the latter are mainly in the business of big data.

Peirano also shed light on the problem of using interns as a workforce nowadays, who usually don’t have the time and the means to check what they are doing, because they have to produce a lot of content, and therefore become sloppy. “Graduates in the newsroom cannot be a business model. And giving more money to the newspapers is not going to save the interns, because they are just going to invest it somewhere else. It is a legislation problem,” she concluded.

Joris van Hoboken, a senior researcher at the Institute for Information Law (IviR) pointed out that the new intermediaries, such as Facebook, Google and Amazon are still resistant to the fact that they are the new media companies and rather see themselves as tech companies. Gatekeepers also have a less important role. Kleins Nielsen agreed with him and added that anyone who logs on a social network will be exposed to some news and content. “Many people just don’t categorise them that way, because they quickly pass by them,” he said. Audiences should think like journalists when reading news, with critical and investigative approach, speakers agreed.

In the second panel, the experts talked about the potentials and threats to democratic election campaigns. Later in the afternoon, the Greens organised an internal expert meeting on Future of quality journalism. The EFJ director Renate Schroeder also participated.