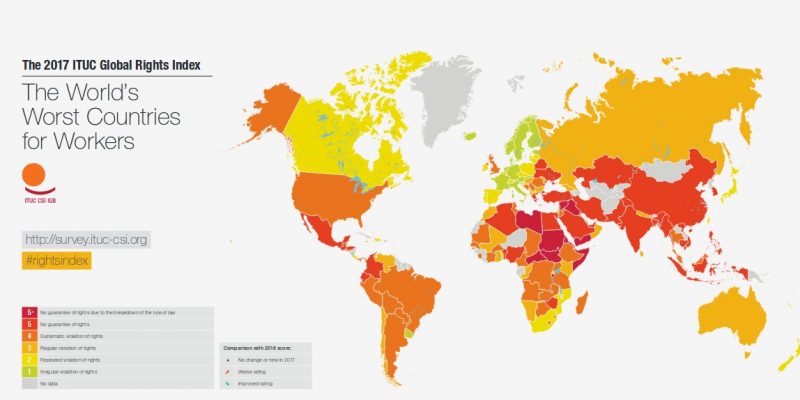 
The International Trade Union Confederation (ITUC) released this year’s Global Rights Index report, providing an insight into workers’ rights violations around the world. It rates 139 countries from one to five according to 97 indicators to determine where workers’ rights are best protected in law and in practice. Following the report, the worst countries for workers in Europe are Turkey, Belarus, Greece, Ukraine, Bosnia and Herzegovina, Romania, Serbia and the United Kingdom.

The number of countries experiencing physical violence and threats against workers has risen by 10 percent in just one year. In Europe, however, trade unions have greater respect and support in society, benefiting from a strong culture and tradition of industrial relations, especially within the member states of the European Union, report showed.

This is reflected in the lower level of violations in law and practice. Unions in Europe have often been wrongly categorised by the elite and right wing opponents as obstacles to economic competition and progress, especially since the onset of the economic crisis, says the report. It goes on mentioning that often in recent years, this lobbying has resulted in restrictions in the capacity of trade unions being weakened in practice despite legal safeguards. In the United Kingdom, the worst anti-union legislation in a generation passed through Parliament, but some of the worst excesses of the bill placed before parliament were defeated by effective union campaigning by the TU.

The Middle East and North Africa continues to be the world’s worst region regarding workers’ rights with the average rating (4.53) becoming worse from last year (4.26). The region is beset with conflict and a breakdown of the rule of law so that no guarantee of fundamental labour rights is possible in countries such as Palestine, Syria, Iraq and Libya.

The report ranks the ten worst countries for workers’ rights in 2017 as Bangladesh, Colombia, Egypt, Guatemala, Kazakhstan, the Philippines, Qatar, South Korea, Turkey and the United Arab Emirates. It also shows that corporate interests are being put ahead of the interests of working people in the global economy, with 60 percent of countries excluding whole categories of workers from labour law.

The full report in English is available here.