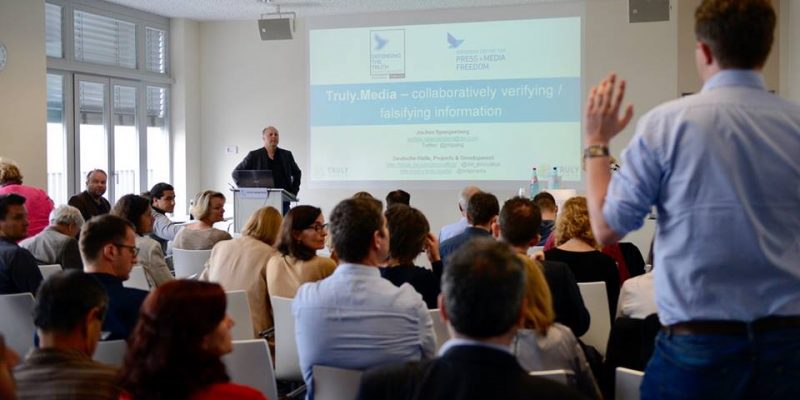 
How to fight fake news? Do facts still matter? The European Centre for Press and Media Freedom (ECPMF) took part in this burning issue with the conference “Defending the truth in a post-truth era” taking place on June 13 and 14 in Leipzig, Germany.

Many case studies were showcased by different NGOs and stakeholders highlighting the need to invest in media literacy, fact-checking trainings and collaborative journalism. LieDetectors is one of the project presented by Juliane von Reppert-Bismarck, aiming to bring journalists into classrooms in order to give them an overview of what a fake news is and to help children understand how mainstream media select news. Walid Salem from the French pure-player Rue89 Bordeaux explained how the First Draft News / CrossCheck verification project is helping people to make sense of what and who to trust in their social media feeds, web searches and media consumption – in partnership with 17 French media outlets.

The participants agreed to point out quality and independent journalism as part of the answer to counter fake news, since self-censorship is highly impacting the journalists’ work. Camille Petit from the European Federation of Journalists (EFJ) presented the Council of Europe study “Journalists under pressure: Unwarranted interference, fear and self-censorship in Europe” showing how journalists’ personal and professional lives are affected by threats and violence both on and offline. “The chilling effect on journalists is important: the study shows that those who experienced cyberbullying, psychological violence or physical assault are more likely to make certain compromises in some aspect of their work, such as toning down or even abandoning some critical or sensitive stories, withholding some information…”

Some recommendations to reduce the impact of fake news on the society are summed up in the Manifesto created by the Ghent University, Université Libre de Bruxelles and Vrije Universiteit Brussel. It calls for joint action from the public, journalists, technology platform providers and policy makers:

“We demand the promotion of media literacy and the citizen’s desire and the need for independent, professional and trustworthy media, including investigative journalism.”

The conference was also a good opportunity to express solidarity to journalist Afgan Mukhtarli, who was abducted in Georgia and dragged to Azerbaijani jail and to ask for his release and to Turkish journalists imprisoned (see how to send a postcard here).

@mogensbb invites everyone to send postcards to jailed journos in #Turkey. Go to @EFJEUROPE website to find the addresses #ecpmf17 @ECPMF pic.twitter.com/sf7srR3i4k