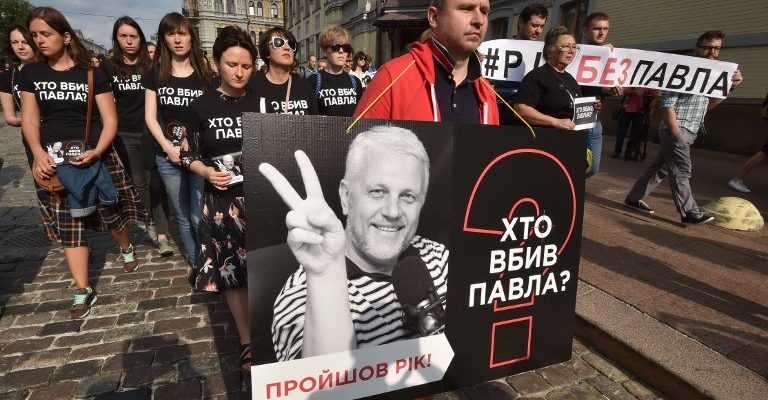 We are writing as active partners of the Council of Europe’s Platform to protect journalism and safety of journalists to urge you to ensure that Ukrainian investigating authorities carry out a thorough, independent, and effective investigation into the murder a year ago in Kiev of prominent Belarusian-born journalist Pavel Sheremet.

Sheremet’s killing in a car bombing in Ukraine’s capital city on July 20, 2016, cast a chill over the country’s press corps, and the ongoing impunity for those behind the crime has continued to affect journalists’ ability to cover sensitive subjects.

The current investigation by Ukrainian authorities, including the General Prosecutor’s Office (GPO), National Police, and Security Service of Ukraine (SBU), has produced no results a year after the killing, as confirmed by Committee to Protect Journalists’ recent report, Justice Denied: Ukraine comes up empty in probe of Pavel Sheremet’s murder, which CPJ launched in Kiev last week. Moreover, as CPJ confirmed during its advocacy mission that week–including in a July 11, 2017, meeting with you—authorities currently have no suspects and no leading motive for the murder.

Independent, enterprising journalists in Ukraine work under hostile conditions filled with threats, harassment, and cyberbullying in retaliation for their critical coverage of government policies and the conflict between pro-Russia separatists and Ukrainian security forces in the country’s east. A number of journalists have said they work in fear, both because of the impunity in Sheremet’s killing and authorities’ failure to recognise the importance of a critical, independent press in a democratic society.

The report on Sheremet’s murder brought into relief a number of flaws in the official investigation that need to be addressed without delay. Crucial video evidence that showcased potential suspects or key witnesses of the crime surfaced only after Ukrainian journalists—not investigators—published it. No one has publicly identified two persons seen on security camera footage apparently planting the bomb under Sheremet’s vehicle, although investigators are in possession of a clear photograph of one of the individuals.

The report also found that police and security service officials have each alleged that the other destroyed video evidence; potential witnesses and Pavel Sheremet’s colleagues say investigators have not closely questioned them; and the national police chief first tasked with leading the murder investigation resigned, citing obstruction by her superiors.

Pavel Sheremet and his former Ukrainska Pravda colleagues were under surveillance in the months before his death, but it is unclear by whom, or why. We are very concerned for their safety, especially given that it remains unclear whether the fact of the surveillance is currently being investigated.

The confirmed presence of a former SBU agent, Igor Ustimenko, near Sheremet’s apartment the very night assassins planted the bomb under his car—and the ongoing lack of clarity about the reasons and circumstances of his presence—further raise doubts about the genuineness and thoroughness of the official investigation.

The authorities were unable to provide clear answers to pressing concerns, including to such basic procedural questions as who is in charge of the investigation or why the photo of the person seen on camera footage apparently planting the bomb has not been publicly disclosed. We hope that these issues can be addressed immediately.

Press freedom concerns, including the lack of progress in Sheremet’s murder investigation, were also raised during meetings between the partners of the Council of Europe’s Platform to protect journalism and safety of journalists, and Ukrainian investigating authorities on April 4-5, 2017.

We encourage you, Mr. President, to ensure that the investigation into Sheremet’s killing examines the possibility that Ukrainian officials—former or current—may have been involved. In order to do that, we ask you to consider independent oversight of this case, which is a litmus test not only for Ukraine’s commitment to press freedom but also for its adherence to the rule of law.

We are pleased to learn that during your July 11 meeting with CPJ, you made a commitment to invite an international criminal investigator to support the Ukrainian investigation into Sheremet’s murder. We hope that discussions on this initiative will take place between Ukraine and its international partners without delay, and we encourage you to immediately contact Ukraine’s partners, including the Delegation of the European Union in Kiev, in relation to that.

Lastly, we strongly urge you to take all measures to protect the space for critical and independent journalism, including by condemning the practice of dividing journalists into patriotic and unpatriotic; and by ensuring that reporters can work freely, without fear of reprisal, and with the full protection of the state. Publicly addressing Pavel Sheremet’s colleagues at Ukrainska Pravda on the anniversary of his murder, and making a commitment to defending their safety, would be an exemplary first step toward achieving that goal.

Thank you in advance for your consideration of these urgent matters. We await your response.