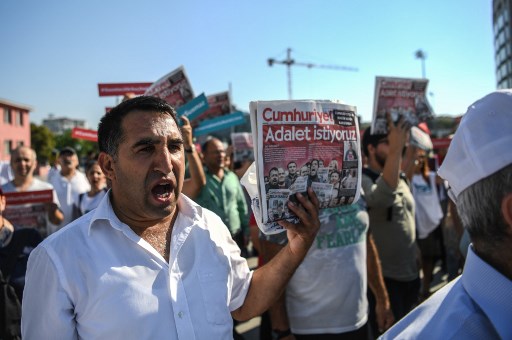 
The EFJ is closely following the proceedings that started on Monday 24 July in Istanbul against 17 prominent journalists, editors and board members of Cumhuriyet newspaper, including Can Dündar, Kadri Gürsel, Murat Sabuncu and Ahmet Şık. EFJ president Mogens Blicher Bjerregård participated in the court case on 24-25 July and met several journalists and EFJ affiliates.

Press freedom must be protected, and not put on trial as it has happened this week in Istanbul with the Turkish newspaper Cumhuriyet. 17 journalists and executives are accused in a completely political and fabricated way for developing and supporting an editorial policy that could favor terrorist movements facing up to 43 years in prison.

International solidarity showed strong support for our accused colleagues, when the biggest court-case on press freedom in Turkey started on Monday 24 July, which ironically is the Turkish Press Freedom Day, as censorship in Turkey was abolished on 24th July, 1908.

Because of the importance of this case, a big number of international press- and media organisations sent a very strong sign of solidarity by attending and covering the most courageous and excellent testimonies of the accused journalists in Istanbul. All of this together with our Turkish affiliates TGS and DISK who both are very firm and active in defending their members and journalists’ rights.

As president of the European Federation of Journalists, I took part in the International delegation on Monday. From the very morning I met with the colleagues of prosectuted staff of Cumhuriyet and joined in their march to the court. When the march was notified, we were protected by the police. I wish press freedom was likewise protected in Turkey.

Among the journalists part of the march, I talked with a Cumhuriyet journalist from Izmir. She told me how important it is for her to show solidarity and fight together for human rights. The violation against press freedom must never be silenced. She and the rest of the Cumhuriyet journalists sent by this way their strong thoughts to their colleagues on trial.

In front of the court building we were up to 1000 people gathered together: colleagues; family members; journalists; politicians including from the European Parliament; human rights defenders and representatives from international organisations. Solidarity messages, speeches and ‘freedom balloons’ showed the Turkey authorities that the whole world is watching them.

Inside the court building hundreds of people wanted to enter the court-room, and it was a bit of a fight to get inside the room with only 150 seats many had to remain outside. It was extremely touching to see and hear how everybody first standing on the floor and on the chairs applauded the 17 accused persons, when they entered the trial, and in particular seeing their family members waiving, shouting and getting in contact with their loved-ones. This scene went on for 10-15 minutes, before the judges could start the trial.

One after the other the 17 journalists and other members of the newspaper’s staff started their “defense” lasting 5 days. Instead of traditional defenses they ripped up the indictment al by showing how fabricated and political they are, and that most of the claimsls should never be something for a court to deal with. They strongly defended their rights to do their job as journalists and as a critical media. Among some of the statements were:

The defendants and their lawyers claimed that they were prevented from bringing some of their personal notes and books in the courtroom.

Five days long and maybe more waiting for sentences or hopefully acquits. In the meantime, the detained journalists are behind bars without access to media except a few newspapers and only contact an hour a week with relatives, but with a glass-wall in between.

All requests for the release of these journalists have so far been systematically rejected. In the absence of any response from Turkey’s constitutional court, their lawyers have turned to the European Court of Human Rights, but Strasbourg cannot start the cases before they end in Turkey and before the Turkey authorities have answered relevant questions. This game can go on for years and therefore international organisations have urged the European Court to act more proactively.

We must urge our international institutions such as the European Commission, European Parliament and the Council of Europe to:

The European Federation of Journalists continue to follow very closely this and other court cases. We will continue until each of the journalists is set free.