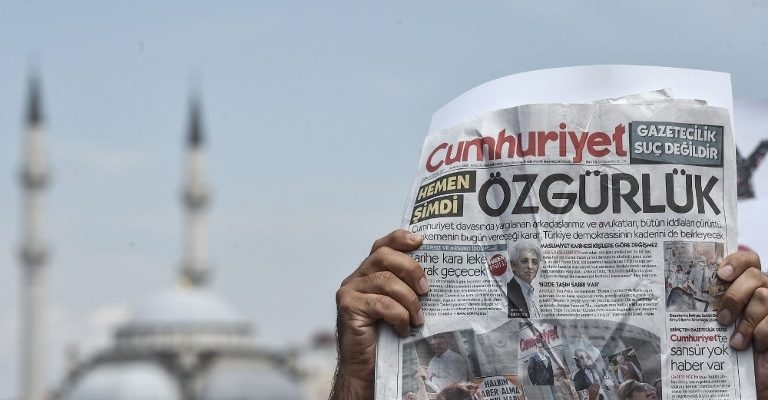 Two other defendants, a jailed teacher prominent on social media, Ahmet Kemal Aydogdu, and a former correspondent based in the United States, Ilhan Tanir, have been included in the same trial.

Arrest warrants for Can Dündar and Ilhan Tanir remained in place.

“Journalists and the international community can breathe a sigh of relief following this decision however hundreds of journalists still remain behind bars in Turkey,” said IFJ President Philippe Leruth. “We demand that president Erdogan’s government put an end to the persecution and criminalisation of journalists in Turkey and release all those still incarcerated.”

“Press freedom must be protected, and not put on trial as it has happened this week in Istanbul,” said the president of EFJ, Mogens Blicher Bjerregård, who attended the opening of the trial. “We call on Turkish authorities to release all journalists in prison and to accord them a right to compensation and reparations.”

The IFJ and EFJ issued the following Joint Statement on Friday together with other international organisations acting as observers of the Cumhuriyet Trial proceedings:

Representatives from international free expression groups and professional journalist organizations observed proceedings in Istanbul this week in the criminal trial of 17 journalists and executives from the newspaper Cumhuriyet.

We reviewed the indictment ahead of trial and delegates were present in court as the journalists and executives defended themselves against accusations that they supported terrorists and violated their managerial duties to the newspaper.

We found defence arguments that the case relies on weak evidence cherry-picked to support a predetermined theory credible. At best, testimony from the journalists and executives strongly suggests that authorities failed to conduct a proper investigation.

Defence arguments that the indictment relies on factual errors and includes as evidence news reports that are mischaracterized or offered out of context raise legitimate concerns, as does prosecutors’ reliance on “experts” whose qualifications seem questionable.

We are concerned by prosecutors’ focus on what appear to be innocuous and unavoidable contacts – or even attempts at contact to which the accused did not respond – with individuals who had a secretive app on their phones, suggesting an attempt to prove guilt by tenuous association.

We are also troubled that a prosecutor in the case is himself under suspicion of links to the Gülen community. That prosecutor, who remains free, is entitled to the presumption of innocence. But so, too, are Cumhuriyet journalists and executives who have spent nearly nine months behind bars.

Viewed in light of events in Turkey in recent years, it is difficult to dismiss arguments that this case is another politically motivated effort to criminalize journalism. We are alarmed that it appears to be grounded on a theory equating journalism with violent extremism.

This case is a test for Turkey – the outcome will signal the place human rights and the rule of law will hold in the country’s future. We welcome today’s order to release seven of the defendants and call on authorities to implement it immediately. But Turkey should release all of the Cumhuriyet journalists and executives, as well as the many journalists and human rights defenders believed imprisoned for their work in violation of the fundamental human right to share and receive information.

Moreover, the issues identified above, among others, lead us to conclude that this case should not have been brought and should be withdrawn fully and without delay.