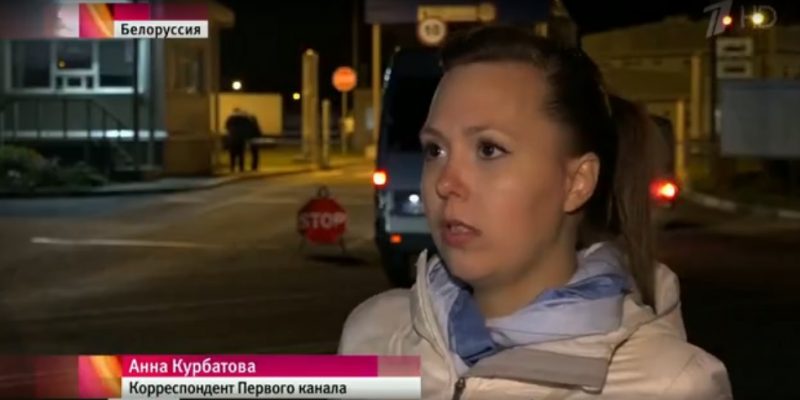 
Russian journalist Anna Kurbatova was deported from Ukraine to Russia on Wednesday 30 August and barred from returning for 3 years, accused of spreading anti-Ukrainian propaganda.

The EFJ and IFJ join their affiliate the Russian Union of Journalists (RUJ) in condemning the deportation of Kurbatova and call on the Ukrainian authorities to lift the ban.

“Russian propagandist Anna Kurbatova, whose forcible expulsion has been decided, has crossed the Ukrainian-Russian border”, said Ukrainian Secret Service (SBU) spokesperson Olena Hitlayanska. “She has been banned from entering our state for three years”.

According to Russian news agencies, Kurbatova has been given an official document by Ukrainian authorities saying she “poses a threat to Ukraine’s national security and sovereignty”.

Russian state TV broadcaster Channel One had previously reported that one of their reporters (Kurbatova) had been abducted and forced into a car near her home by unknown assailants. Hitlayanksa later confirmed that day that the journalist had been taken into custody by the SBU.

Rossiya 24 TV channel also reported that Kurbatova, originally from Stavropol, had received threats relating to her work as a journalist in the past. The channel also said that she was placed on the Myrotvorets website blacklist as an anti-Ukrainian propagandist. Myrotvorets (Peacemaker, in English) is a Ukrainian website responsible for leaking a large trove of journalists’ personal information last year – an action condemned at the time by the EFJ and IFJ.

In a letter to Ukrainian foreign minister Pavlo Klimkin yesterday, OSCE Representative on Freedom of the Media Harlem Désir said “expelling journalists from or denying them entry to Ukraine are troubling and excessive measures, especially as these actions lack transparency and a proper appeal mechanism”.

Kurbatova’s deportation came after two Spanish journalists, Antonio Pampliega and Manuel Angel Sastre were banned from entering Ukraine by the SBU for allegedly threatening national security. The EFJ and IFJ condemned the ban – reportedly in response to their coverage of alleged Ukrainian army shelling of civilian areas – as an attack on free speech.

“We are now seeing a pattern of repeated attempts to stifle free speech in Ukraine. Both foreign and Ukrainian journalists are facing these threats, said IFJ General Secretary Anthony Bellanger. “Anna Kurbatova’s deportation is yet another example of Ukrainian authorities resorting to excessive and inappropriate measures which threaten all journalists fundamental right to report freely and without harassment”.

“Detention and deportation of Anna Kurbatova is an obvious violation of journalists’ rights,” said Nadezda Azhgikhina, EFJ Vice-President. “It is very sad that again and again journalists are used as soldiers in “information wars”. Since spring 2014, Russian and Ukrainian journalists’ organizations have been building fragile bridges, under EFJ, IFJ and OSCE umbrella, developing dialogue. Actions like banning Anna Kurbatova are challenging the future of the dialogue and our joint work on journalists’ safety”.

The EFJ and IFJ reported this disproportionate measure on the Council of Europe Platform for the Protection of Journalism.