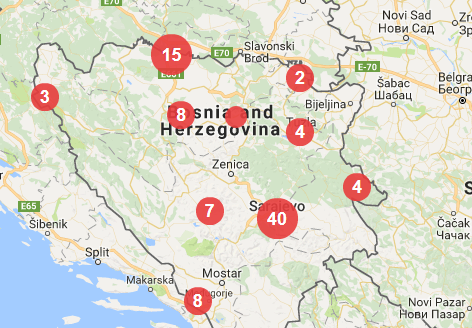 
A Special report on the status and cases of threats against journalists in Bosnia and Herzegovina (BiH) was published on Monday 28 August 2017 by the Institution of Human Rights Ombudsman of BiH. The publication highlights the very bad employment status of journalists in the country, as well as the increase of violence, harassment and attacks against them.

Some of the key findings highlighted in the report are:

The Ombudsman Institution defends the right for journalists to have adequate employment agreements and social protection in order to be able to remain impartial and independent.

“The lack of collective bargaining agreements in certain media outlets complicates the status of journalists to a large extent”, the report says.

In addition, the report shows the increasing violence used against journalists, in particular via the Internet. “Journalists have been increasingly abused and harassed via social networks. It is particularly alarming that women journalists have been increasingly exposed to this type of attacks and to a larger degree than their male colleagues. Motives of attacks most frequently resemble an intention to destimulate a journalist from publishing a story or piece of information or an intention of sexual harassment or other type of gender-based harassment and cyber-bullying.”

The EFJ affiliate, the Association BH Journalists, welcomed in a press release the publication: “the recommendations of the Ombudspersons on the need for professional training of judges, prosecutors and police officers in connection with investigations and to punish attacks against journalists, head in the right direction.” The association also expressed the hope that the Ombudsman will continue to monitor media freedom and the rights of journalists in BiH.